As issues around the environment and climate change come to the fore in public debate, we're hearing more and more in the news about carbon tax. So what exactly is it and how does it impact on your pocket?

The carbon tax is a charge applied to carbon-emitting fuels such as coal, peat, oil and natural gas. Introduced in 2010, the tax is intended to reduce carbon dioxide emissions and is part of Ireland’s strategy to support a greener and cleaner environment.

The charge is currently €48.50 per tonne of CO2 emitted by the fuel, meaning more polluting fuels are taxed more. The rate was increased from €41 per tonne of CO2 in the 2023 Budget. However many environmental campaigners have called for the tax to be increased significantly and the Government has set a target of €100 per tonne by 2030.

What does the carbon tax cost me on my gas bill?

Natural gas suppliers in Ireland, such as Bord Gáis Energy, Electric Ireland and Energia, are all obliged to add a carbon tax charge to all customers' bills, which works out at around 1 cent (including VAT) for every kWh of gas used.

Considering the average Irish household uses 11,000 kWh of gas every year, the carbon tax adds around €110 in total to your annual natural gas bill, which works out at just over €18 on every bi-monthly bill.

Carbon tax is not applied to electricity bills (although here there is the PSO levy).

Based on the fact that the average Irish motorist drives around 17,000km a year in a petrol vehicle and 24,000km in a diesel vehicle, the tax is adding around €113 a year to your driving costs if you have a petrol car and €134 a year if you're driving a diesel car (based on 5.5 litres per 100km for petrol vehicles and 4.6 litres per 100km for diesel).

Where else am I paying carbon tax?

If you’re a big fan of a blazing fire fuelled by coal and briquettes, you'll probably have noticed a couple of hikes on the price of these fuels over the past couple of years. You guessed it – carbon tax is fuelling those increases too.

A bag of coal is currently made up of around €5.09 in carbon tax while the tax on every bale of briquettes equates to around €1.10. 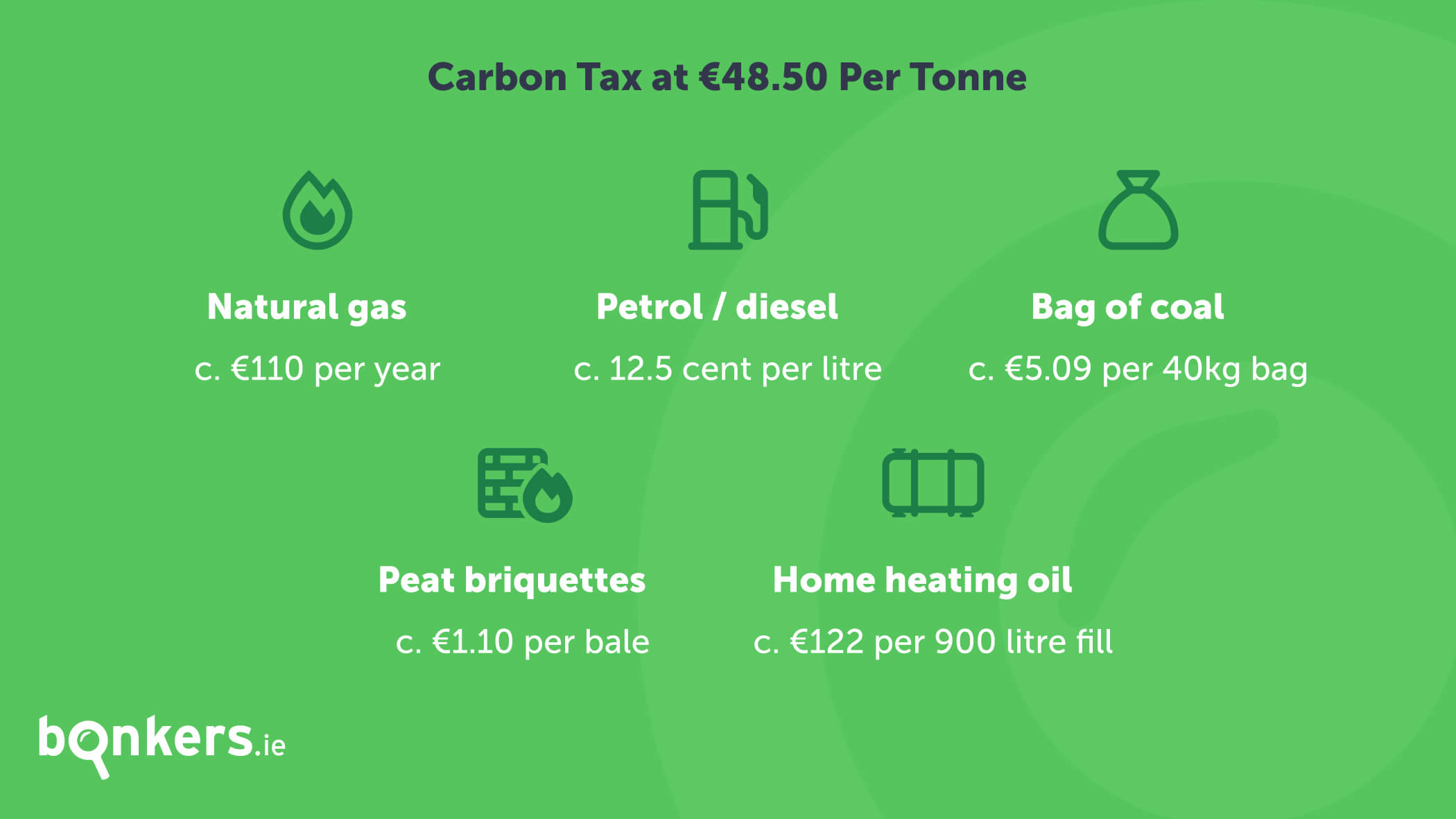 What about the business sector?

The farming sector is one of the biggest emitters of CO2 in Ireland. However the agricultural sector, as well as the aviation sector which is another large contributor, are largely exempt from the tax for now.

Will a carbon tax solve our climate change problems?

Critics will argue that the tax hasn't radically changed people's behaviour in the countries where it's been introduced and that it's merely yet another tax on hard-pressed consumers.

Supporters will argue that it's the only way to encourage both businesses and consumers to move away from carbon-intensive fuels and to place the planet on a more environmentally sustainable path going forward.

The truth probably lies somewhere between the two.

Whether we like it or not, the polluter pays principle means a carbon tax is going to form a core part of Ireland's climate change strategy over the coming years. However the Government will have to reward those who make more environmentally conscious choices and invest in things like proper public transport and green energy too.

How can I save?

Using wood to fuel your fire and maybe investing in some woolly jumpers to keep you warm on chilly evenings will help reduce your heating costs. Also changing to an electric or hybrid car will reduce your driving fuel costs.

And of course, investing in a deep retrofit to improve your home's energy efficiency is another option and is ultimately one of the key objectives of the carbon tax in the first place. Take a look at this article to review your finance options for retrofitting and learn all about retrofitting in this episode of our bonkers.ie podcast.

However, the best and easiest way to save is by reducing your gas consumption and checking to see if you’re on the best rate out there.

You can compare natural gas prices on bonkers.ie right now and switch to a cheaper supplier in just minutes. Alternatively, you can check out dual fuel deals if you’re looking to save on electricity too.

If you’re still in contract with your current energy supplier and don’t fancy paying an early exit fee, consider reducing your energy consumption. Here are 10 ways to heat your home for less and 15 ways to use less electricity and save money

Do you have any questions about the carbon tax or switching energy supplier? Feel free to contact us with any questions and we’d be happy to help. You can get in touch with us on Facebook, Twitter and Instagram.

The future of renewable energy in Ireland

What is hydrogen energy?

Which appliances use the most electricity?