Complaints to CRU rise significantly in 2021

The CRU’s Customer Care Team provide a free dispute resolution service to energy customers in Ireland, while its annual report reveals the types of complaints made and dealt with throughout the year.

The Commission for Regulation of Utilities (CRU) releases its Customer Care Team report every year and is invaluable when it comes to assessing the quality of energy providers' customer service.

Reliable customer service is an important function of any good business and it's one thing that’s very important to us here at bonkers.ie.

In this article we’ll take a look at the CRU's most recent report on customer service for 2021, which may be of particular interest to those switching providers soon, especially as prices have never been higher.

The various consumer contacts received by the CRU in 2021 culminated in the creation of 6,608 cases - a massive 51% increase on the number of contacts in 2020.

Some of the most important information is as follows:

Chairperson of the Commission for Regulation of Utilities (CRU), Aoife MacEvilly said:

The CRU offers a free and independent complaint resolution service to energy customers and customers of Irish Water.

There was a 51% increase in contacts to the CRU last year, which is likely to have been driven by increased awareness of our customer protection role as customers deal with the challenge of increased energy costs and see the impact on their bills.

We would call on any customer with a complaint to raise this with their energy supplier or Irish Water, and if they are not satisfied with the outcome, contact the CRU Customer Care Team.

As you can imagine, the CCT is inundated with queries, issues, and complaints from consumers day in and day out. This was especially true toward the end of 2021 when energy prices began soaring.

However, the CCT only fully investigates what are called ‘complex complaints’ - those where a customer has already exhausted their respective energy suppliers’ complaints handling process.

In 2021 the CCT opened a total of 204 complex complaint investigations involving energy suppliers or network companies, an increase of 14% compared to 2020.

When it comes to the top listed complaints, billing and account problems continued to produce the majority of customer complaints year-on-year at 50% and 25% respectively.

A look at the energy suppliers

Electric Ireland had the highest number of closed complaints in 2021, totalling 45, which was was a 25% increase on 2020. However it also has the biggest market share which means it’s not necessarily a fair gauge of the supplier’s customer service performance. But more on this shortly. 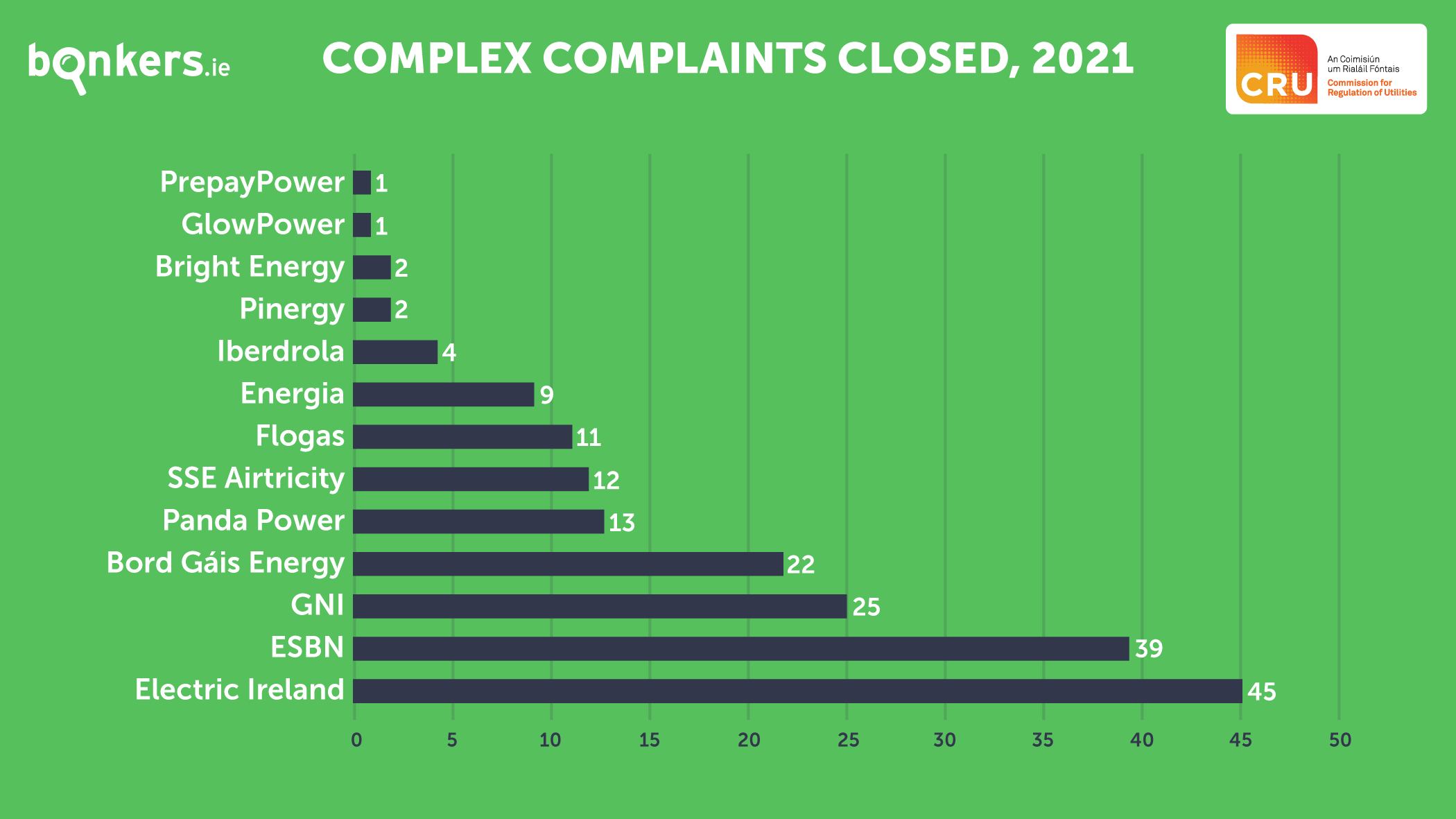 Bord Gáis Energy had the second highest number of closed complaints as can be seen from the graph above, coming in at 22.

PrePayPower and Glow Power had the fewest number of closed complaints in 2021.

Next we’ll take a brief look at the number of upheld complaints versus each supplier's market share, as this is a more accurate way of comparing each supplier’s customer service.

An upheld complaint is one where the CCT found the respective energy supplier to be at fault.

In broad terms, 32% of complaints were upheld in favour of the customer, 68% were not upheld, and three cases were resolved by an early settlement in 2021. 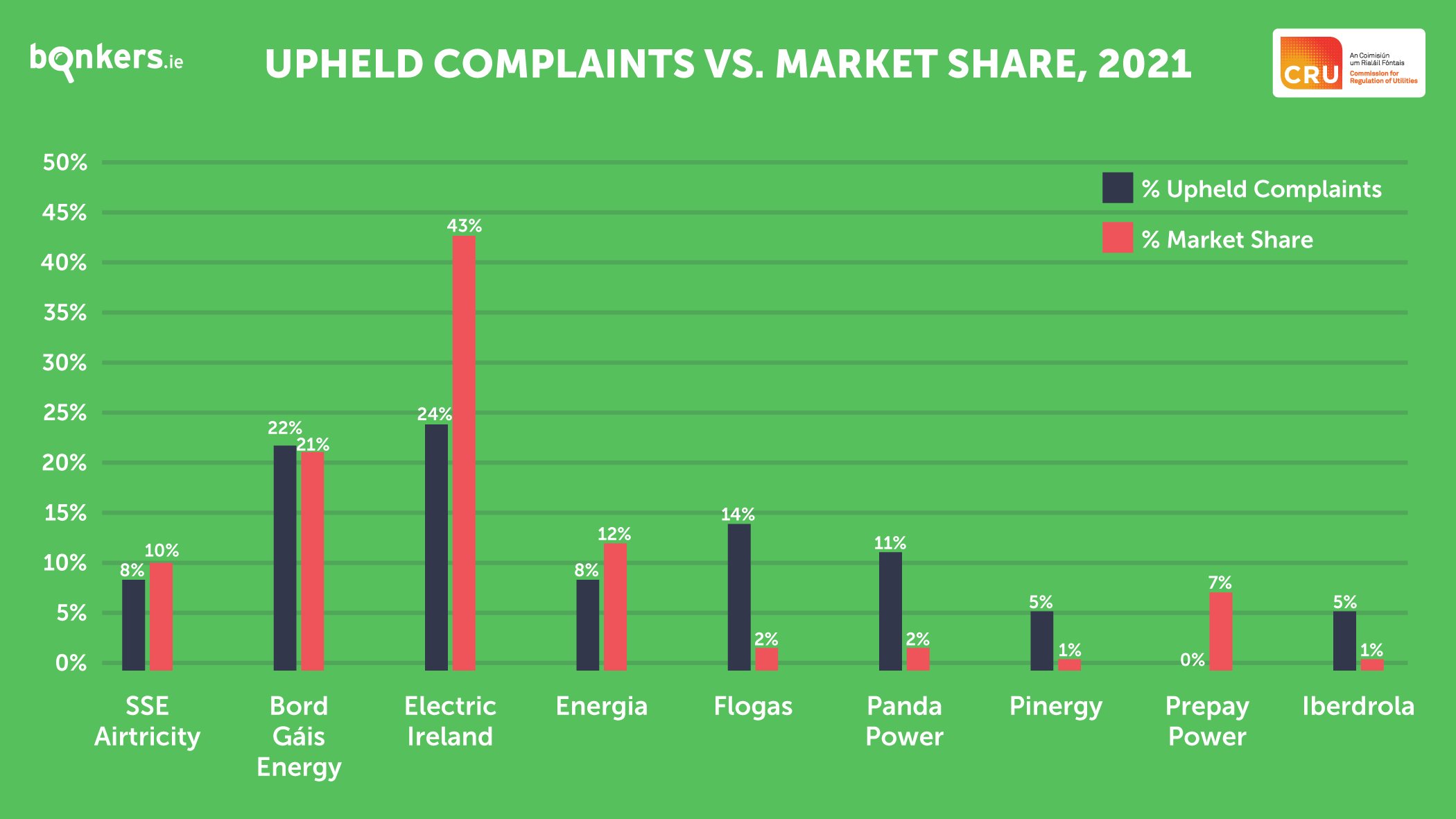 Electric Ireland held the largest combined market share of 43%, although its share of upheld complaints stood much lower at 24%.

Interestingly, more than three quarters of the complex complaints made against Electric Ireland were not upheld.

BGE came in second with 22% of complaints upheld against a market share of 21%.

PrePayPower had the lowest percentage of upheld complaints relative to market share, with 0% upheld against a market share of 7%.

Panda Power (1.80) and Flogas (1.78) meanwhile had the highest number of complex complaints referred to the CRU per 10,000 customers. 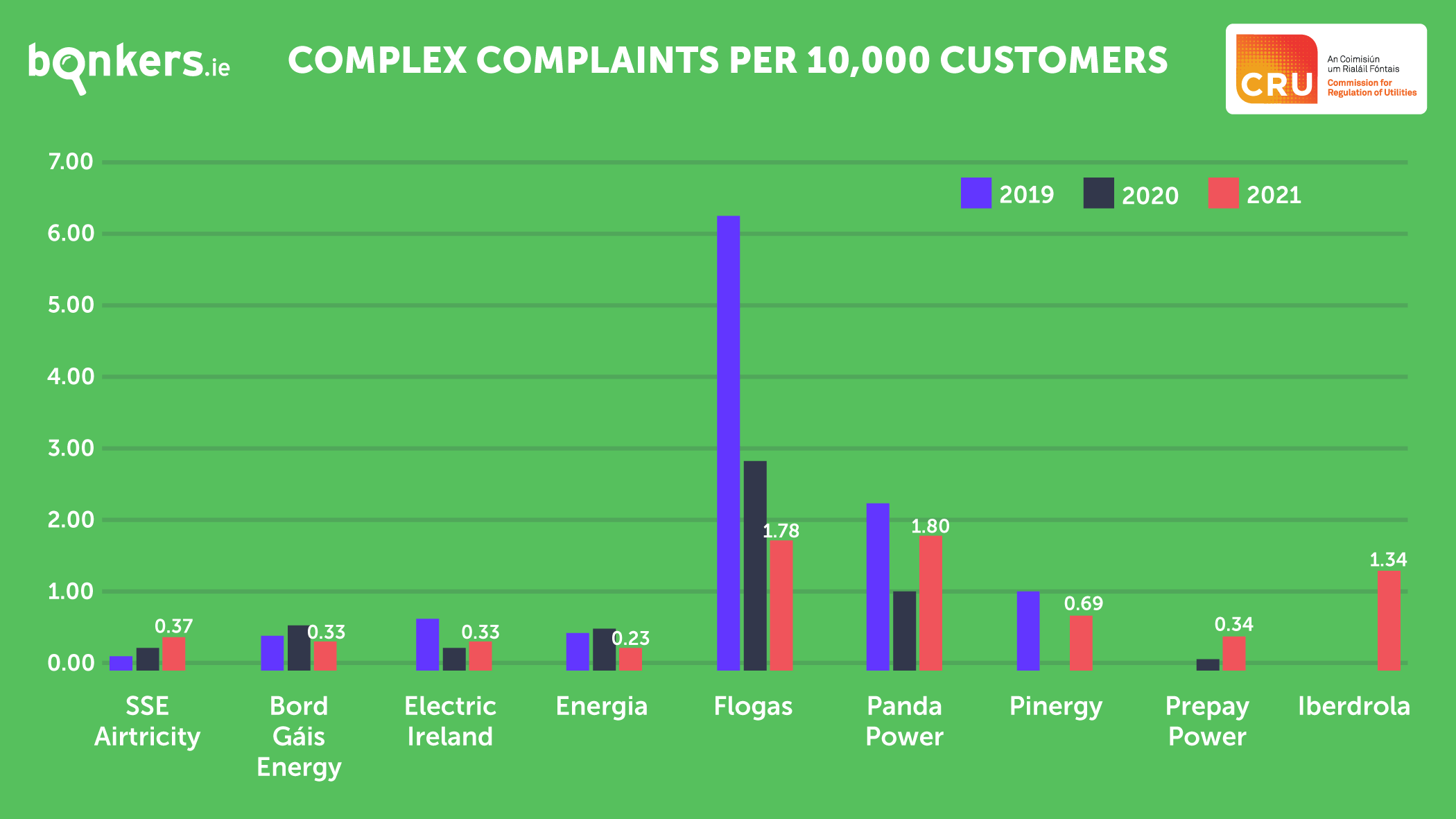 It's important to note that results for suppliers with a lower market share (Flogas, Iberdrola, Pinergy, and Panda Power) can appear starker when compared to larger suppliers, especially when observed in the above graph.

Switch and save on your bills

If you’re not happy with your customer service, and if you haven’t switched supplier in some time, you’ll be glad to know the process has never been easier.

By using our energy price comparison tool online you can find the best deal for you in seconds and be signed up within a number of minutes, provided you have all the right information to hand.

What’s more, the average energy customer who switches today could save up to €709 on their bills!

However, before making the switch, you might find it beneficial to take a look at some of the following:

Run a quick comparison right now across electricity, gas, or dual fuel and see how much you could save with bonkers.ie!