The latest CXi Report analysing the customer experience provided by companies in Ireland has revealed the best and worst performers during the pandemic with the Credit Union retaining the top spot.

Since its first outing back in 2015 the CXi Customer Experience Report has always been an accurate representation of how consumers feel about brands in Ireland, and this year is no different.

The report is published annually by the CX Company and the findings are based on a survey conducted by Amarách Research where a cross-section of almost 18,000 consumers are asked to give feedback on over 150 companies spanning 11 business sectors.

This year's report is even more interesting than previous years for the simple fact that its responses highlight the impact COVID-19 has had on how companies interact with their customers, along with the ways companies have adapted to make customer experiences as seamless and as enjoyable as ever all the while adapting to the “new normal”.

So, what did this year’s report reveal?

Sitting at the top of the leaderboard this year is none other than the Credit Union. It’s, amazingly, the brand’s seventh year in a row in pole position, and is the only brand to have remained in the top 10 since the survey started.

One of the many reasons for the Credit Union retaining top spot was down to the way it exceeded expectations for customers. The financial institution led the way amongst those included in the survey, with 36% of customers feeling its service went above and beyond for them.

Smyths Toys came in second in this year’s survey. The popular retail brand moved up 30 places from last year and secured its second place spot thanks to an “innovative customer training program”, as well as having quickly adapted to customer needs by establishing a “highly efficient pick, pack and ship operation in record time”, according to the CXi report.

The top 10 this year is dominated predominantly by pharmacies and coffee companies, helping to make up seven of the businesses that populate the top 10 list.

This is perhaps unsurprising given the key role they have played in keeping people both healthy and caffeinated throughout the pandemic.

This year’s results were particularly special for McCabe’s Pharmacy (+16 places), Lloyds Pharmacy (+41), and Nespresso (+32) who all moved up considerably in the rankings.

Supermarkets were also represented in the top 10 this year by Aldi, having replaced Lidl in making the coveted list.

That being said, the overall customer experience (CX) score fell by a record 4.4%, the biggest decline recorded since the survey began in 2015.

It’s all disappointing to see that Ireland’s CX score is now at an all-time low having recorded a cumulative decline of 10.8% since 2015.

Here’s a closer look at the top 10 as well as the respective companies’ CX scores. 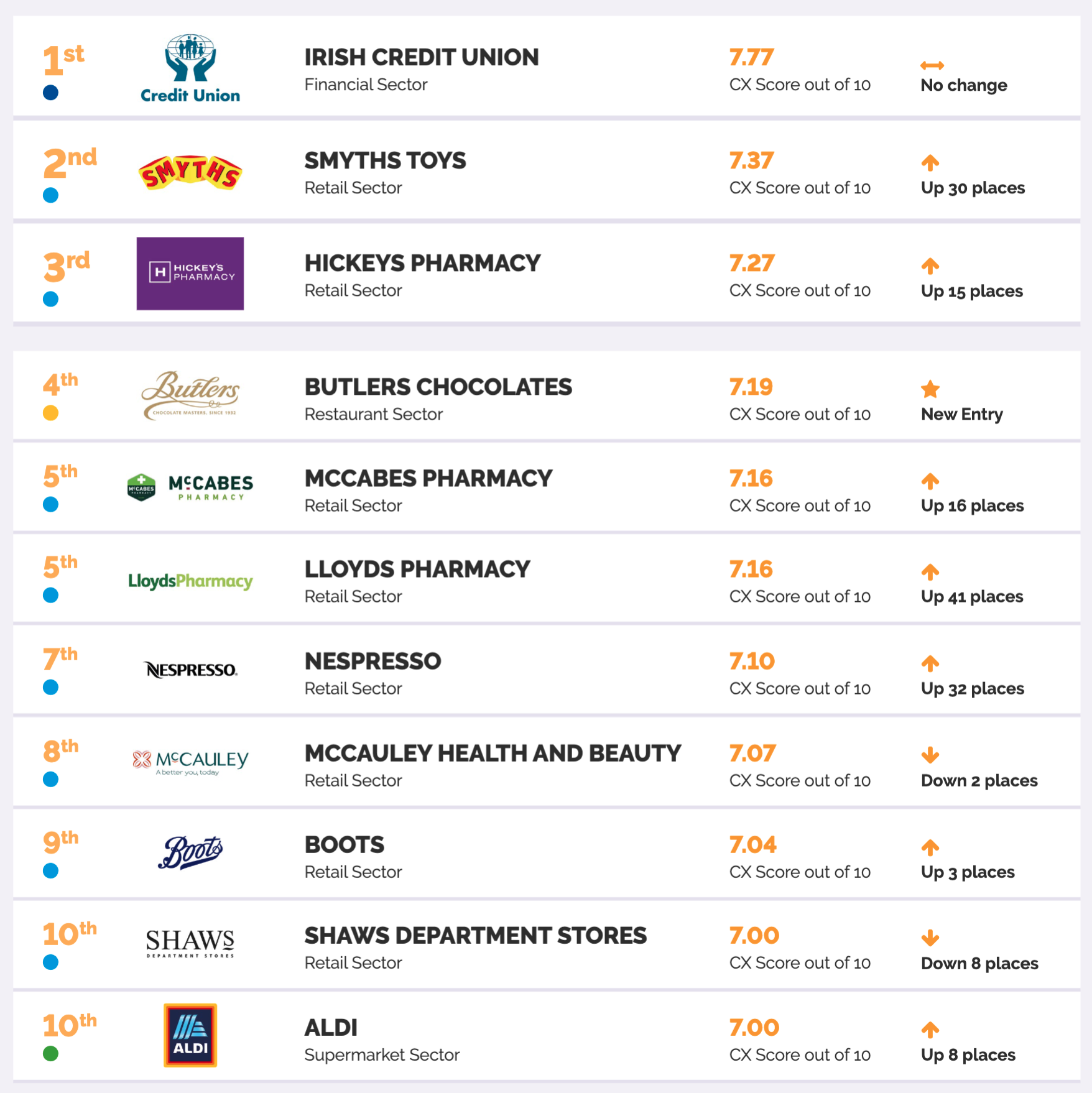 Where there are companies killing it when it comes to customer experience and going above and beyond, there are also those who, well, aren’t.

Eir was officially named as the worst performing company from a customer experience standpoint out of a ranking of 151 businesses.

The telecommunications company was singled out for failing to meet customers’ expectations, with almost half, or 44% of people stating this.

All this being said, Eir still has a number of great deals available for those looking to upgrade their in-home broadband, along with TV and home phone deals - check them out here!

Eir replaced Ryanair as the worst performing company with the airline moving up two places to 149th place, just above Facebook in 150th.

Michael Killeen, the Chairman of the CX Company, described Eir's treatment of its customers as appalling.

The telecom sector has been one of the poorest performers in our survey over the last seven years. While Eir is the standout offender and seems more focused on making money for its owners rather than doing what’s right for their customers, its competitors Sky and Virgin would also recognise more work needs to be done to deliver greater customer experiences.

Meanwhile, also featuring in the bottom ten were the Department of Social Welfare, RTÉ, Irish Water, SSE Airtricity, and Sky.

Other companies which failed to meet expectations and moved down this year’s rankings included GameStop, Adverts.ie, the Passport Office, and Abrakebabra. 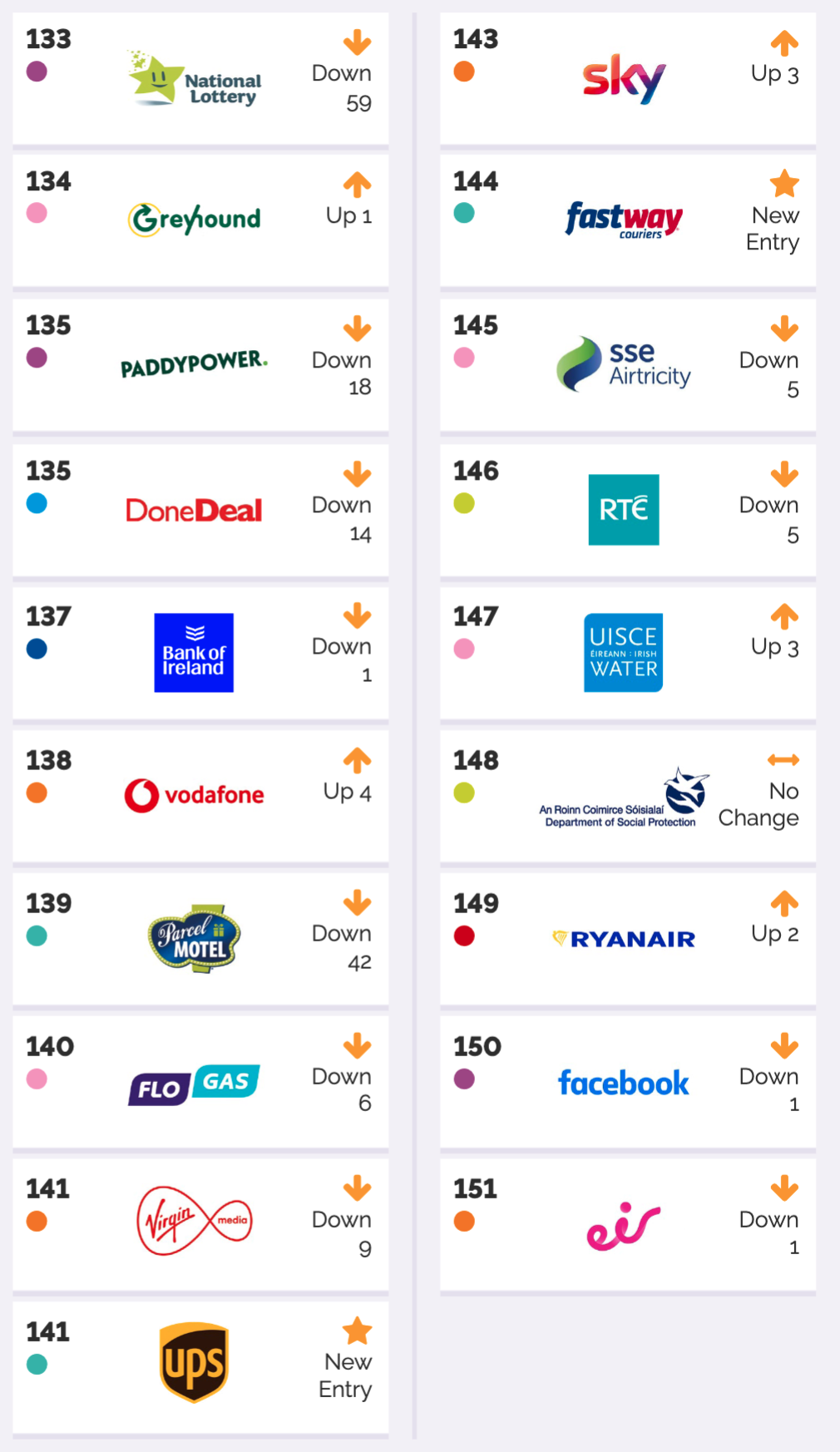 The companies that recorded the biggest jump in rankings this year were Energia, Lifestyle Sports, Lloyds Pharmacy, FreeNow, and An Post Money.

Interestingly, Ryanair had the most improved CX score in 2021 with an improvement of 19.8%. This is despite only moving into third position from the bottom of the pile last year.

Are you happy with your service providers?

Are you happy with the customer experience you’ve had with your utilities and banking providers? If not, consider switching providers!

On bonkers.ie you can compare available deals for services such as energy, broadband, insurance and banking products. Not only could you start receiving better service, but you could also end up saving hundreds on your annual bills too.

Let’s hear from you

What do you think of the results from the CXi Report? Are you surprised with how any of the companies ranked? We’d love to hear from you in the comments below!