Which bank is best for mobile banking?

In a constantly evolving digital space, do banking apps measure up to our technological expectations? Who is currently providing the best service and who is looking to the future with their mobile banking app?

Mobile banking is no longer the future of banking; it's now the norm. AIB, for example, recently announced that over one million customers now use the its mobile app with customers using the app 36 times a month on average.

According to a survey by Ipsos MORI for Deloitte's annual Mobile Consumer Survey, 97% of consumers in Ireland have access to either a smartphone or tablet and 98% of smartphone owners use their devices daily. As a result it’s safe to assume that many of us are now conducting our banking via our phones and other smart devices. In fact, 56% of us prefer, when given the opportunity, to do a task digitally.

So with the demand for smart digital solutions to everyday tasks so high, how have banks reacted when it comes to personal financial needs?

Do banking apps cut the mustard?

For many of us (and particularly for those of us on the go) our first port of call when it comes to internet banking is our financial institution’s mobile app.

At the very least, we’ve come to expect that banking apps should enable us to carry out basic banking needs such as checking balances, making payments, transferring money between accounts, managing direct debits, standing orders and so on.

But for the tech-savvy amongst us, we want to know who is really upping the ante when it comes to app utility. In other words, which financial institution is offering the best forward-thinking digital solutions to your banking needs?

Below we have compiled a table that compares the apps of Ireland’s five major banks as well as two digital only banks: N26 and Revolut.

Who comes out on top?

Banks are starting to come around to the fact that customers want more from their apps aside from basic functionality, particularly when it comes to convenience. Out of Ireland's five major banks, Permanent TSB and Bank of Ireland are definitely the laggards while KBC has really led the pack on this one in our opinion, with AIB a close second.

In late 2016 KBC became one of the first banks (along with AIB) to bring Google Pay to Ireland. Then in March of 2017, it was first again (along with Ulster Bank this time) to bring Apple Pay to Irish customers. It followed this up with FitBit Pay and Garmin Pay in the following months for fitness tracker wearers.

This isn’t surprising, as KBC has stressed its commitment to a digital-first strategy in the past and strives to deliver an “always-on 24/7 accessibility” for its customers as part of it.

In 2016 it also became the first bank in Ireland to allow customers to open a new current account online and in autumn 2017 it followed this move up with a new app that allows new customers to open an account via their smartphones in just 5 minutes. Both moves proved to be highly successful; an outcome which falls in line with the above statistic that mentioned that people predominantly prefer to perform a task digitally, given the option.

Not one to rest on its laurels, in March 2018 KBC announced a new feature on its app that allows customers to apply for personal loans of up to €20,000 with one-hour approval. And most recently KBC announced in January of this year that customers can now view their BOI and AIB account balances within the KBC mobile app too. Not bad!

The other banks have started to catch up, with AIB in particular offering most of the features that KBC does, but they've been somewhat slower to do so while some banks like Bank of Ireland and PTSB are genuinely years behind and don't even offer basic services like Apple Pay, Google Pay or fingerprint log in.

However, N26 and Revolut are where the real innovation in online banking is right now. 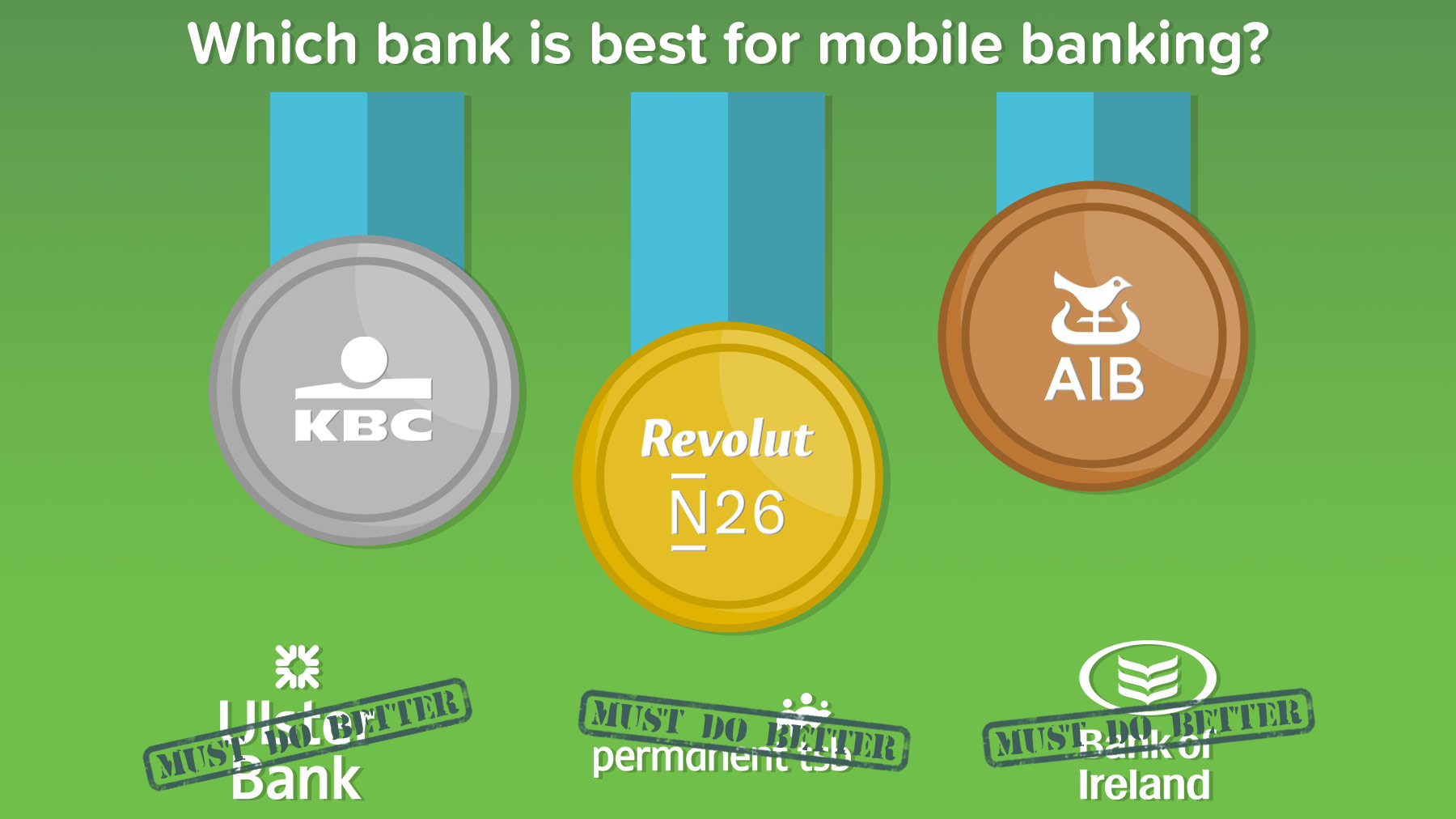 Of all of the products that we provide comparison services for here on bonkers.ie, customers seem to be the most reluctant to switch current accounts and when we ask why the answer is nearly always the same; "all the banks are the same" being the general refrain. Though the above review shows that there have been some efforts made in digital innovation in the last couple of years, more and more we're finding that it's actually not the banks who are making the biggest strides in this area... it's financial technology or "fintech" start-ups that are making the biggest splash.

Digital-only banks (and their mobile apps) have moved up quite considerably in the world from where they were just a few years ago. Previously considered a niche segment of the market, some of these banks now offer all of the features (and more) that you'd get from a traditional current account and often without many of the associated fees!

We frequently get customers recommending the virtues of fintech apps like Revolut and N26 as the most preferable way to manage daily financial transactions. The reason they're becoming so popular is that they offer intuitively and beautifully designed, easy-to-use apps that give customers features like up-to-the-minute spending analytics broken down by category or retailer, push notifications, fee-free transactions, fee-free currency conversation and innovative savings options like Revolut's clever "Vaults" feature.

See what all the fuss is about with this in-depth comparison of N26 versus Revolut and all the great services they both offer.

I love tech, should I switch?

Though technological innovation that enables utility and convenience in banking sure is cool, one should always consider the many other factors that are likely to influence and determine which bank is best for your unique financial needs.

For instance, you might want to familiarise yourself with different bank policies on withdrawal fees or the rules for fee-free banking before making any decisions.

Whatever you decide to do, always be sure to compare offers right here on bonkers.ie in advance.

Negative interest rates - here's everything you need to know

Negative interest rates - here's everything you need to know