How have the Central Bank Lending Rules affected us since they were introduced?

As the Central Bank extends the deadline for submissions on the Loan-to-Value and Loan-to-Income regulations to 31 August, we take a look at some of the effects that the new lending rules have had since they were introduced in February 2015.

The Central Bank’s Mortgage Lending Rules have been with us since 9 February 2015 and they have completely changed the housing landscape across Ireland.

When they were introduced, the intention of the Central Bank was to reduce the risk of spiralling house prices, and prevent a future credit-fuelled housing bubble. Noble intentions, certainly.

Ireland has been devastated by the lunacy that prevailed in the mid-noughties – and many of us are still feeling the effects through negative equity, mortgage arrears, unemployment, and even homelessness.

But what has actually happened since the Mortgage Lending Rules were introduced? And who did they affect?

The Central Bank did expect that there would be increase in the number of people renting due to their new lending rules. Which makes sense because many people would have to rent for longer to afford the larger deposits required to buy a home. But more people in the rental market pushes up prices, and in just the last year rents have increase by 9.3% nationwide according to daft.ie.

Rent increases are not entirely due to the Central Bank rules though, they have also been fuelled by a decrease in the number of properties available to rent.

Daft.ie reported there were only 5,000 properties to rent in Ireland on 1 May 2015. But a year later, there were just 3,082. Which is a staggering 38% fall in the number of rental properties available in just 12 months. And this will continue to push up rents on the limited number of properties that are available.

All this means that it’ll be much harder for prospective buyers to save for deposits because of the extra money they have to pay in rent.

Houses prices stagnate in Dublin and climb in commuter towns

But the rules haven’t really solved the problem… they seem to have shifted it. Now prices are going up in the “more affordable” commuter areas instead. In the year since the introduction of the central bank rules, house prices in the counties that ring Dublin had increased by up to 10% and they continue to rise.

But increases were even more pronounced in Ireland’s main regional cities with Waterford and Limerick prices going up by 18%, and Cork seeing an increase of 16% while prices in Galway rose by 15%.

The Central Bank has been telling us for some time that we have been “deleveraging” – i.e. we’re getting out of debt and paying off our mortgages. They attribute this to older well off householders using savings to clear mortgages. And these mortgages were not being replaced. Which makes sense given that credit was very hard to come by in the years after the bust and so the number of outstanding mortgages was falling. Again, it adds up.

However, credit has been available to qualified borrowers for several years now and although the decline in active mortgages has continued, it has accelerated substantially since the introduction of the Central Bank Lending Rules. And here it is numbers:

Then between Q1 2015 (when the Central Bank Lending Rules were introduced) and Q1 2016, the number of active residential mortgages in Ireland reduced by 13,475. An acceleration of 158%.

This is sudden and dramatic change cannot be explained away by simple deleveraging. It points to something much more serious… First time buyers simply can’t get loans to buy homes. 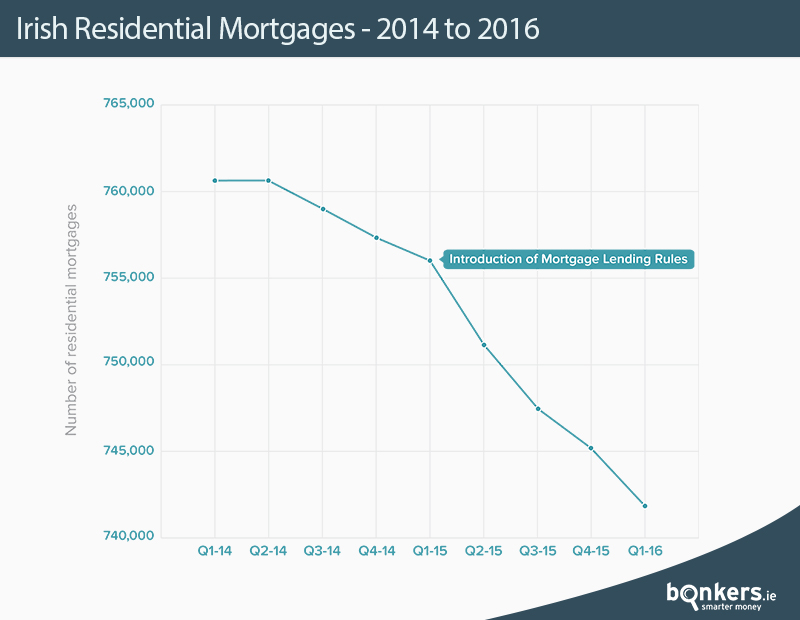 I don’t have an answer to the housing crisis, but I can certainly see some of the causes – the biggest of which is that the construction industry downed tools while our population grew which put ever more pressure on existing housing stock – which inevitably drove up house prices and then rents.

I do agree with the Central Bank that first time buyers are special and should be treated differently though, but I think they should be given more than they are now. Currently the Loan-to-Income ratio stands at 3.5 times gross salary. This should be increased for first time buyers.

And for the rest of us? Well, if you’ve already bought a house and you’re not a first time buyer, then you’re on the property ladder already. We should allow the younger folks the security of getting on to it too.

Oh, and we should build more homes. Lots of them. Simon?

If you'd like to make a submission to the Central Bank of Ireland on the Housing Loan Requirements Regulations, i.e. The Mortgage Lending Rules, you can do so here

Thanks to daft.ie and the Central Bank for their fantastic statistics and reports.