Why are gas and electricity prices in Ireland increasing?

24th Jul, 2018...
electricityenergygas
This article is quite old, you might prefer our latest Gas & Electricity pieces
Daragh Cassidy
Head Writer

This summer has seen the country’s energy suppliers announce a whole raft of price increases. Are we just being ripped off or is there another reason behind it?

It’s been a bad summer for Irish energy customers with news that 8 of the country’s 10 energy suppliers are set to increase their prices over the coming weeks.

And while energy prices are probably the last thing on people’s minds during the warm summer months, the increases will certainly be felt once we head into winter.

Ireland imports a huge amount of its energy, such as gas, from abroad. This means we’re highly susceptible to increases in the price of energy on international wholesale markets.

Over the past year, the price of gas has increased by over 30%. The increase is mainly due to higher global demand but recent maintenance work by Norway (a major gas producer), on its gas pipeline infrastructure has disrupted supply and put pressure on prices too.

Oil and coal are two other fossil fuels that we import and use in our electricity generation and these too have increased in price. Although prone to fluctuations, the price of oil has increased by around 20% so far this year, largely due to increased global demand and restrictions on output from oil-producing countries aimed at reducing supply and boosting price.

What’s more, oil is bought and sold on the international markets in dollars. The dollar has strengthened against the euro this year, which means the price of oil is also increasing in euro terms. A double whammy for customers! 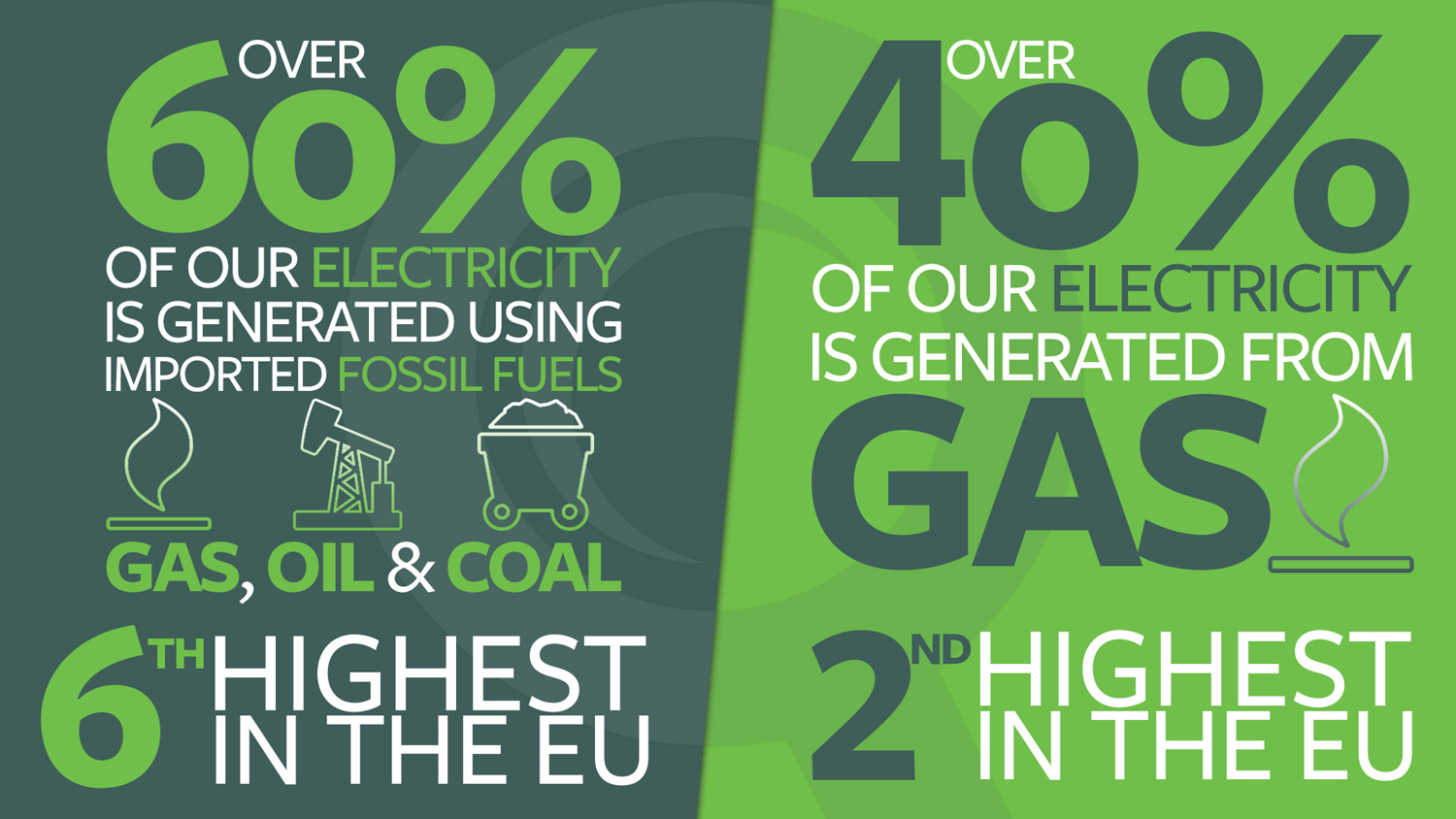 What about renewable energy?

Being a small island on the edge of the Atlantic, there is huge potential for Ireland to leverage the power of wind and wave energy. And by bringing more home-generated renewable energy into the mix, we’d be less at the mercy of international oil and gas markets.

Unfortunately, Ireland’s level of renewable energy output, although increasing, still falls short of what’s required here. In fact we even risk facing fines of hundreds of millions of euro from the EU for not achieving our 2020 climate and renewable energy targets.

Also, renewable energy is still more expensive to produce than energy from burning fossil fuels. This is one of the reasons why the Public Service Obligation (PSO) levy was introduced in 2001; to generate extra money to support and subsidise the sector. However, since the PSO was introduced it has steadily been increased and now costs customers over €100 a year.

So while more renewable energy is a longer-term solution to rising energy costs, and of course global warming, in the short term it’s costing us money. A lose-lose for customers for now it seems.

And for various reasons we’ve never generated nuclear energy in Ireland, which is relatively cheap to produce. So with fossil fuels all increasing in price, and nuclear and renewable energy not fully viable alternatives, we’re now paying the price in the form of higher bills.

Are we being ripped off with our energy prices?

The latest figures from Eurostat, the EU statistics agency, show that Irish electricity prices are the fourth highest in the EU with only Denmark, Germany and Belgium having higher prices.

However, as well all know, Ireland is an expensive country for consumers anyway and Ireland’s energy prices are no more out-of-line with the EU than our other prices. Cold comfort I’m sure!

Things like wages and business overheads also get factored into the price of supplying energy and these costs are also higher in Ireland than other European countries.

What can be done to beat Ireland’s rising gas and electricity prices?

Firstly, consumers should always look at ways to reduce their energy consumption.

Whether that’s installing energy-saving light bulbs or remembering to unplug appliances at night, there are lots of little things we can do to use less energy around the home.

Secondly, customers should look at switching energy supplier each year.

Energy suppliers usually save their best rates for brand-new customers, which are heavily discounted compared to the standard rates a longer-term customer is charged. However, these deals usually expire after 12 months. At this stage, if you don’t switch, your supplier will revert your plan to standard pricing and you’ll pay more for the exact same service.

So by switching over to a new deal with a new supplier every year, you can save on your energy bills.

Around 27,000 people switch electricity supplier, and 11,000 switch gas supplier, every month, so why not join them! It's quick and easy to switch and can all be done online in the space of a few minutes.

Head over to our energy price calculator now and see what you could save.

bonkers.ie accredited by the CRU for tenth year in a row

Ireland’s climate targets and the importance of renewable energy

Q&A: How will the Government’s electricity credit work?

bonkers.ie accredited by the CRU for tenth year in a row

Ireland’s climate targets and the importance of renewable energy

Q&A: How will the Government’s electricity credit work?