15th Jun, 2015...
This article is quite old, you might prefer our latest Gas & Electricity pieces
Simon Moynihan
Staff Writer

A small cut in electricity bills could be on the cards as The Commission for Energy Regulation has proposed a 12% cut in the PSO Levy for householders.

The amount of money needed between 2014 and 2015 for schemes subsidised by the PSO Levy was €335.4 million. The CER reckons that between 2015 and 2016, PSO Levy supported schemes will require €304.8 million, an overall drop of 9% for businesses and households combined.

So how much of a cut will households see?

Domestic electricity customers currently pay €64.37 (€73.06 including VAT) per year for the PSO Levy. It usually appears on bi-monthly bills as a charge of €10.56.

The PSO period runs from October to September. Changes to the Levy take effect on October 1st each year.

Why is the CER proposing a cut in the PSO Levy?

Lower wholesale prices have put some upward pressure on the PSO Levy because when price are lower, more money is needed to subsidise renewable generation and the peat and gas plants that are in the scheme.

However, Levy contracts for power plants at Tynagh, Aughinish and Edenderry all end next year and this will reduce the amount of PSO money needed by €38 million.

Since its introduction, the PSO Levy has reduced once in 2011. 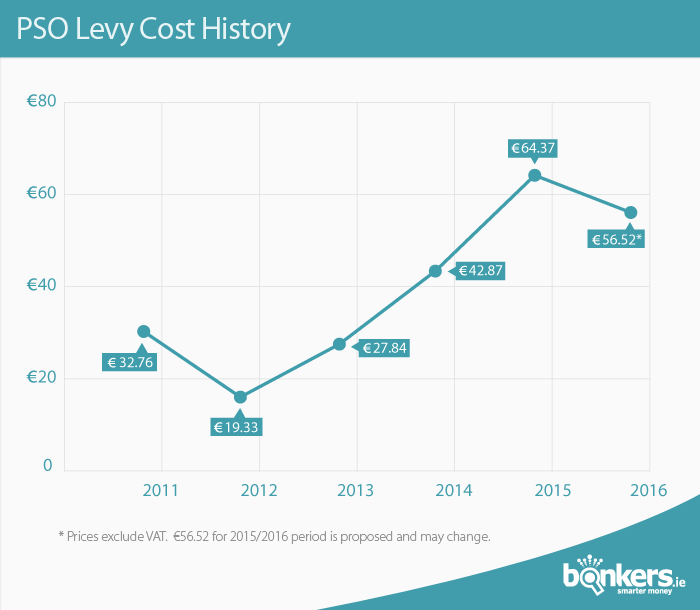 Will there be electricity blackouts this winter?

Will there be electricity blackouts this winter?