5th Nov, 2015...
This article is quite old, you might prefer our latest Gas & Electricity pieces
Mark Whelan
Staff Writer

Pinergy has unveiled a brand new smart in-home display and app, giving pay-as-you-go customers increased control over their energy consumption and spending. We take a look!

Ireland’s crocked warrior, Paul O’Connell, was quoted in just about every newspaper, blog and news bulletin on Tuesday, following his first press conference since that injury against France.

“Paul, when will you be back playing?”

“What are your thoughts on our World Cup performance, Paul?”

“Why oh why did Ian Madigan change his lucky haircut?”

These are just some of the types of question fired around the Westbury Hotel on Monday morning. If you saw photographs from the press conference, you might have noticed a big Pinergy logo behind Paul O’Connell’s head.

Well, that’s because this wasn’t a rugby event at all, it was the launch of Pinergy’s brand new smart in-home display and mobile app!

Let’s take a look at Pinergy’s new set up.

Pinergy is one of three pay-as-you-go electricity suppliers in Ireland (along with PrePayPower and Electric Ireland). With a PAYG plan, you use an in-home payment meter to pay for electricity as you use it. And that means no more bills.

If you like to feel in complete control of your spending and want to know what the most expensive appliances are to run, PAYG will sound particularly appealing.

And with the launch of a mobile app and smart in-home display, taking control of your electricity spending is going to be a good bit easier.

I was given two personal demos of Pinergy’s new in-home display at the Westbury on Monday morning, and it looks pretty neat.

The display allows you to see how much you’re spending in terms of euros, kilo-watt hours and carbon emissions in real time.

This makes it nice and easy to get a grasp of exactly which appliances are hurting your pocket (and the environment) the most. 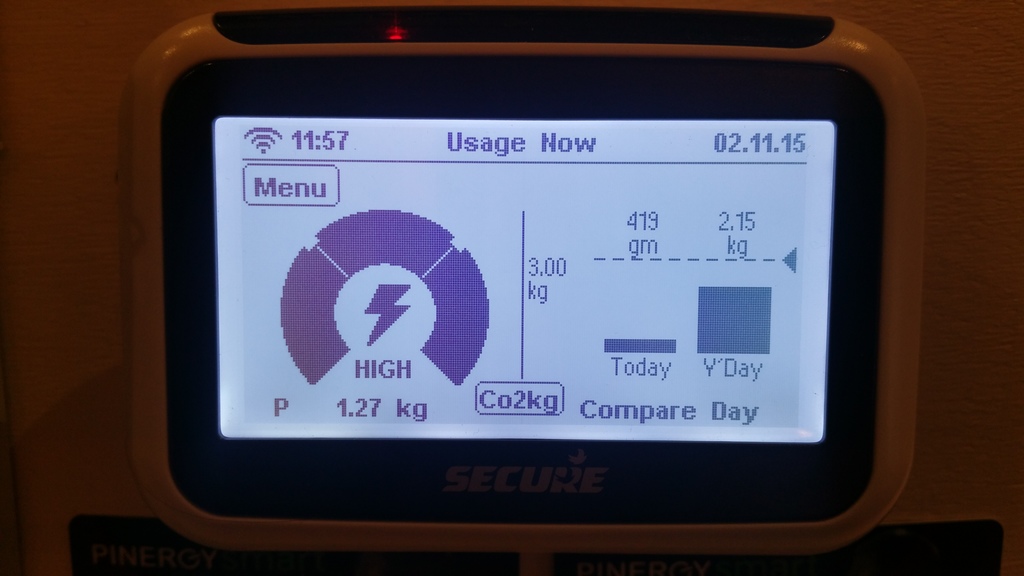 The display is very quick to react to changes too.

There was an iron, a kettle and an electric heater hooked up to the demo displays I used on Monday, and as the heat was turned up on the heater and the kettle turned on, sure enough the display dials ticked to the right almost instantaneously.

Another handy feature on the display is a traffic light system which tells you whether or not all of the electricity in your home is turned off.

A green light means you’re consuming (and spending) nothing, while a red light means you are. Very handy when rushing out of the house in the morning!

Pinergy’s new in-home set up is nicely complemented by a mobile app, which allows you to top up your payment meter with the press of a button.

You can program the app to top up your account every time your credit drops below a certain point, or you can just top up manually whenever you feel like it.

How Much Does it Cost?

Pinergy guarantees to match standard unit rates and Standing Charges, meaning that one kWh of electricity costs 16.59 cent (ex VAT) with the supplier.

Once the PSO Levy, Standing Charge, service charge and taxes are thrown in, an average household will spend about €1,343 on electricity in 12 months with Pinergy.

It’s worth noting that the industry’s standard unit rate is set to drop to 16.09 cent per kWh (ex VAT) on November 16th, while the Standing Charge is due to rise by nearly 50 cent a month too. It’ll be interesting to see whether or not Pinergy matches these new rates.

Pay-As-You-Go as a Lifestyle Choice

Due to the presence of a daily service charge, a pay-as-you-go plan is an expensive way to get your electricity. The whole idea behind Pinergy though is that with greater visibility of your consumption, you’ll end up using less electricity and saving money that way.

It's a lifestyle choice for customers who like the idea of not getting bills anymore and who would like to improve their energy efficiency, but saving money requires some effort.

If it's Paul O’Connell motivating you to do so though, you’re hardly going to be lazy about it, are you?