It’s official. The only countries in Europe where it’s more expensive to make a cuppa and turn on the telly are Denmark and Germany.

Today, Ireland was declared the third most expensive country in Europe for electricity. Now Irish customers probably won’t be surprised to hear that after years of price increases, but it really is official. Eurostat – the EU statistics office - crunched the numbers across 28 EU countries and published their list today.

According to Eurostat, when you add up all the unit rates, standing charges, taxes and levies, we’re paying 25.4 cent per unit of electricity. It’s a heck of a lot. It means that 10 minutes in your Mira power shower will cost you 33 cent, and a load in the tumble dryer will cost you a euro.

That the Germans and the Danes are paying more than us is not much comfort when you consider that leccy is cheaper nearly everywhere else though. In Bulgaria they pay just 9 cent and in Hungary they pay just 11.5 cent. In fact, in most of Eastern Europe they pay half what we do.

But what about our neighbours?

As they say though, 99 percent of statistics only tell 49 percent of the story, and that’s pretty true here too. Sure, we’re paying a truckload for our electricity, but (and it’s a big BUT) Eurostat seem to be calculating Irish prices based on German consumption.*

So how much more electricity do we use?

So, if you actually apply Irish consumption to Irish prices, you get a figure more like 22.85 cent per unit of electricity – about 2.5 cent cheaper than Eurostat says. Sure, it’s still very high, but it gets us off the podium and puts us around sixth place in the electricity price stakes.**

Here’s another thing though. Germany and Denmark are being taxed out the eyeballs. Seriously. 52% of German electricity bills are made up of taxes. In Denmark it’s 57%, so no wonder their consumption is so much lower than ours. By contrast our government is going easy on us at 18% electricity tax. And the Brits? Lowest in Europe. Just 5%.

Which brings us to the worst part… If you take the taxes out of electricity prices altogether, you’ll find that we pay more than any other country in Europe to our electricity suppliers. But then that’s a statistic too, and you know what they say about statistics…

So how did we get here?

Well, you’ve probably noticed that the electricity prices have gone up over the last few years in Ireland. In fact, they’ve gone up a lot. Back in 2010 an average household was paying €990 a year. Now the same household is paying €1,211.

Here’s a history of electricity prices showing how we ended up paying 22% more now than we were just five years ago. 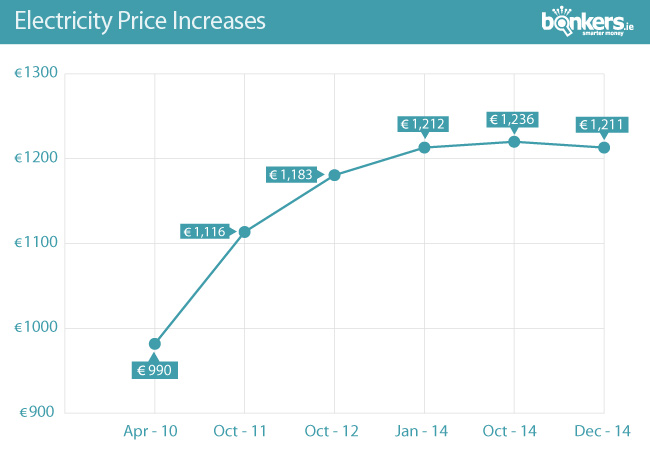 *Eurostat says that they calculate electricity prices “for a household with an annual consumption of between 2,500 and 5,000 kWh”. Using Eurostat’s electricity price of 25.4 cent per unit for Ireland, it looks like they are basing that number on a consumption of 3,250 kWh, which is substantially lower than the CER’s stated average consumption of 5,300 kWh per household. You can see the Eurostat Electricity and Gas Price Statistics here.

**6th June 2015 - It has been pointed out to us that the SEAI collects the Irish energy consumption data for Eurostat. They ask each supplier for the quantity (kWh) of electricity (and gas) sold and for the revenue collected. They then divide the revenue by the volume of electrcity and arrive at a true overall average price that takes into account all the standing charges, taxes, levies, discounts etc. The same methodology is applied in all the other EU countries for the data that Eurostat publish. What this means is that we do in fact maintain our place as the third most expensive country in Europe - and not sixth as my back-of-envelope calculations suggest.