How Irish attractions plan to tackle energy costs this Christmas

From Christmas lights to keeping buildings warm this festive season, we take a look at how local authorities and businesses plan to tackle their energy bills without jeopardising Christmas festivities.

With energy prices continuing to rise and the threat of electricity blackouts looming overhead, many local councils and businesses are looking at ways to reduce their energy consumption and bills over the Christmas period.

According to an EU agency, Ireland faces up to 6.25 hours without electricity this winter, making it the second-highest outage in the European Union after France, which faces up to 26 hours.

This has spurred many local authorities and businesses to adopt new energy-conscious practices to ensure that Irish people get the Christmas experience they’ve grown to love so well, minus the hefty price tag and environmental impact.

Visiting the glittering Christmas lights draped across Ireland’s most popular city streets is a tradition for many Irish families looking to soak up the Christmas spirit and get some last-minute Christmas shopping done.

However, these lights also threaten to put a strain on the national grid and consume valuable energy needed for Irish households.

With that in mind, let's take a look at how local authorities and famous Irish attractions plan to reduce the energy consumed by their decorative lights this festive season.

Each year Dublin Town spends six weeks erecting 4km of lights or 1 million light bulbs along 25 streets in Dublin City for Christmas. 300,000 of these lights can be found flickering on Grafton Street alone.

To lower the energy needed to support these light displays, Dublin’s Christmas lights have been replaced by LED lights, which use up to 85% less electricity than normal bulbs.

The lighting times for these Christmas displays will also be reduced in a move to save electricity. Typically, these lights were turned on at 2pm each day but now they will only be on between 4pm and 2am.

Grafton Street lights, which usually shine from 7am to 4am daily, will follow the same lighting pattern as the rest of the city.

Dublin City Council’s colourful and Christmas-themed light projections projected onto major buildings in Dublin, such as Trinity College and the Mansion House, will now be powered by hydrogenated vegetable oil (HVO) generators. This will reduce emissions from these light shows by 90%. 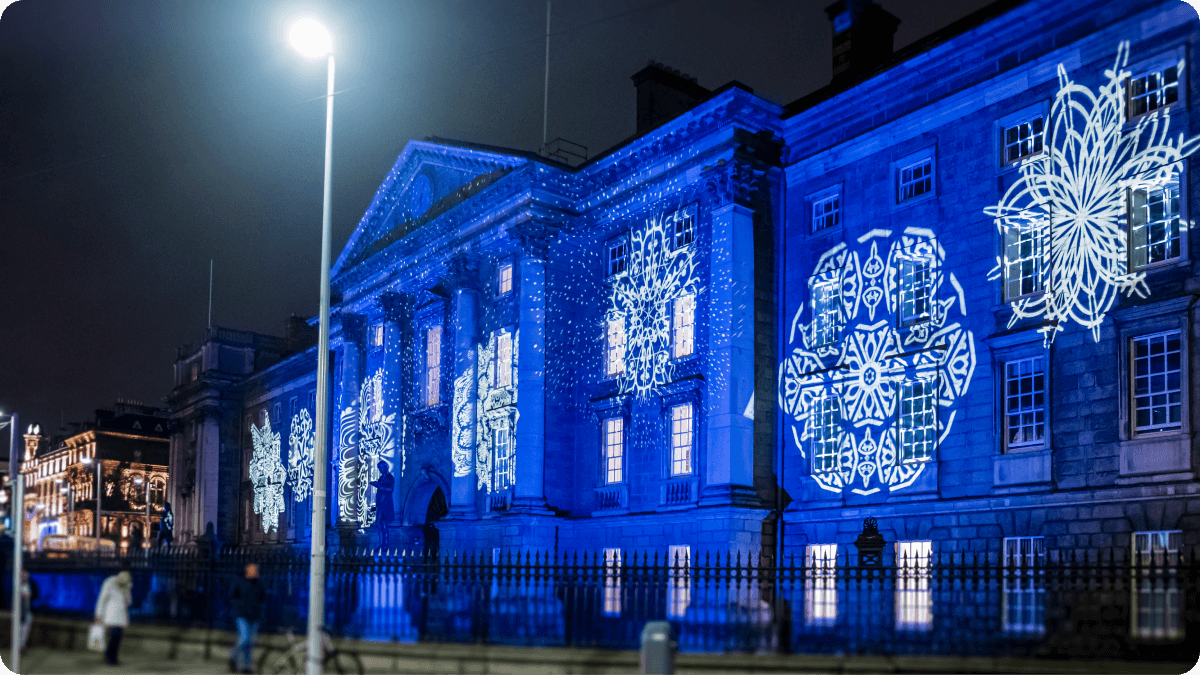 Speaking of sustainable energy sources, Dublin Zoo has opted to take its Wild Light show off the national energy grid this year to help protect Ireland's electricity supply. The Magic of Life themed lights display will be entirely powered by HVO and will be turned off one hour earlier.

As a sports stadium, museum and one of Ireland’s largest conference and events venues, Croke Park has seen its energy bills increase by 100% for both gas and electricity in the last year.

With this figure only forecast to rise, the home of the GAA has taken steps to try to alleviate its energy bills this winter. Sensor lights have been installed and its lighting fixtures have been upgraded to LED light bulbs. It is also exploring the possibility of using solar energy to help light its offices, TV and pitch screens and catering units to name a few.

Outside of the capital city, cities and towns across the country are looking at similar ways to reduce their use of electricity to keep energy bills down.

Cork City Council has stated that the current energy and cost of living crisis has led them to adopt a ‘balanced approach’ when it comes to the Christmas lights this year. They will be using LED-powered light bulbs to brighten up their streets and suburbs.

A number of councillors have also called for the turning on of the festive lights to be delayed until December 8th and to end on January 6th, with one also suggesting for the lights to be switched off every night at 10pm.

Up the road in Limerick, a spokesperson for the city and county council stated that they are reviewing all options to combat the electricity crisis, which includes potentially reducing the hours the lights are left on for.

However, not everyone is choosing to let the energy price crisis dim their festive plans. One Limerick pensioner Tony Noonan has said that ‘no electricity bill will deter [him]’, from putting up his charity Christmas lights show.

The three-time winner of the best private dwelling in Ireland for a lights display, he plans to cover his home with 5,000 lightbulbs this festive season. Mr. Noonan expects his electricity bill this Christmas could reach up to €6,000.

The Christmas lights will be switched off for approximately 30 minutes every day to save power amidst the soaring energy costs.

How Europe plans to reduce its electricity consumption

Across the continent, other major cities are looking at ways to tackle the energy supply shortage and climate change.

The popular Oxford Street Christmas lights display will use two-thirds less energy compared to 2021. It will see 300,000 LED lights made from recycled polymer (plastic) strewn across the streets and working on reduced hours.

Known as the ‘City of Lights’, the French capital has opted to turn off the shimmering lights of its most famous landmark, the Eiffel Tower, an hour earlier this winter to conserve energy. The exterior lights draped along the Champs-Élysées will also adopt this energy-saving measurement.

Recently, the Portuguese government published a series of guidelines which limits Christmas light displays to only be turned on between the hours of 6pm and midnight, from December 6th until January 6th next year.

The German government has also introduced several measures to save energy this winter, including switching off the lights of the capital monuments, like the famous Brandenburg Gate, as well as lowering the maximum room temperature in public and office buildings.

Why are Christmas lights important?

Seeing as Ireland and its other European neighbours are in the midst of an energy price and supply crisis, a cost-of-living crisis and an environmental crisis, you may be wondering why are national and local authorities across the continent choosing to put up Christmas lights this year?

The answer is no. There are a few reasons for this. In fact, Christmas lights have been known to:

How Irish business plan to keep warm this Christmas

Lighting displays aren’t the only energy guzzler that businesses and organisations are concerned about this winter - heating costs are also on the agenda.

In line with the Irish Government’s ‘Reduce your Use’ policy, the Cabinet recently passed measures designed to reduce the energy usage of the public sector and combat heating costs. These measures will see all State buildings lower their temperature to 19°C and turn off the heating two hours before closing.

Doyle’s Corner, a bar and restaurant in Dublin, decided to take a more creative approach to tackle its rising heating costs. Throughout October, the pub turned down its heating one night a week and offered a 20% discount to any customers who wore coats indoors.

However, the financial strain on businesses to keep their doors open during the Christmas period was laid bare when one Waterford restaurant owner stated he would need to sell a pint for €15 to €20 to make ends meet.

Unfortunately, this is a common story being heard by small businesses, shops and cafes up and down the country as the financial strain caused by skyrocketing energy bills threatens to close their doors this winter.

Cut your energy bills this Christmas

If you too are looking at ways to lower the cost of your energy bills this winter, take a look at some of our articles on the topic here.

Keep an eye on our blogs and guides pages for more saving tips and helpful suggestions.