The rate change will come into effect from the 1st of May and will see residential and commercial customers pay more for their energy use.

Back in October when the Government announced the most recent budget, many eyes were firmly fixed on what, if any, changes would be made with regard to the Carbon Tax in Ireland.

As many watched on in anticipation it was confirmed that there would be significant increases in the price charged on carbon, all the way up until 2030.

As the planned changes come into effect from the 1st of May we take a look at what exactly the carbon tax is, as well as the toll the tax will take on consumers’ pockets.

The carbon tax is a form of pollution tax and is levied on carbon-emitting fuels such as coal, peat, oil and natural gas, generally referred to as ‘fossil fuels’.

The carbon tax works by setting a price for how much carbon a fossil fuel emits when burned. In other words, the government sets a price per tonne on carbon, then translates it into a tax on carbon-emitting fuels like natural gas, coal or oil.

The tax was introduced here in Ireland back in 2010, is intended to reduce carbon dioxide (CO2) emissions, and is part of Ireland’s strategy to support a greener and cleaner environment.

What it will cost

In the October budget back in 2019 the government increased the carbon tax from €6 to €26 per tonne of carbon emitted as part of its larger plans to increase the price of carbon from €20 to €80 by 2030.

The rate change, coming into effect from May 1st, will have a bearing on the price of fuels such as coal and home heating oil. The new rate will see gas customers pay an extra €14 per year, on average, meaning the tax now adds around €61 annually to the average gas bill.

The increase in the tax also means it now adds around €2.73 in total to a 40kg bag of coal, 59 cent in total to every bale of briquettes and €65 to every fill of a 900-litre home heating oil tank.

The tax already adds around 6.5 cent to every litre of petrol and diesel; the charges implemented on these fuels came into effect from midnight on budget day last October.

The carbon tax doesn’t apply to electricity, where the PSO levy is applied, and which currently adds €34.08 (ex VAT) or €38.68 (inc. VAT) to electricity bills a year.

The Minister for Finance, Paschal Donohue has promised to ring fence the money raised from the carbon tax for mainly environmental, green and public transport initiatives, with €3 million going towards the advancement of electric vehicle infrastructure which will double the number of local authority on-street charging points.

Commenting on the news, Daragh Cassidy, Head of Communications at bonkers.ie said:

“With all that’s going on right now due to Covid-19 and with hundreds of thousands of people having been laid off, this government tax increase couldn’t have come at a worse time.

And although energy suppliers have announced reductions in the price of gas recently, on the back of falling wholesale prices, tomorrow’s increase in the carbon tax will reverse some of those savings." 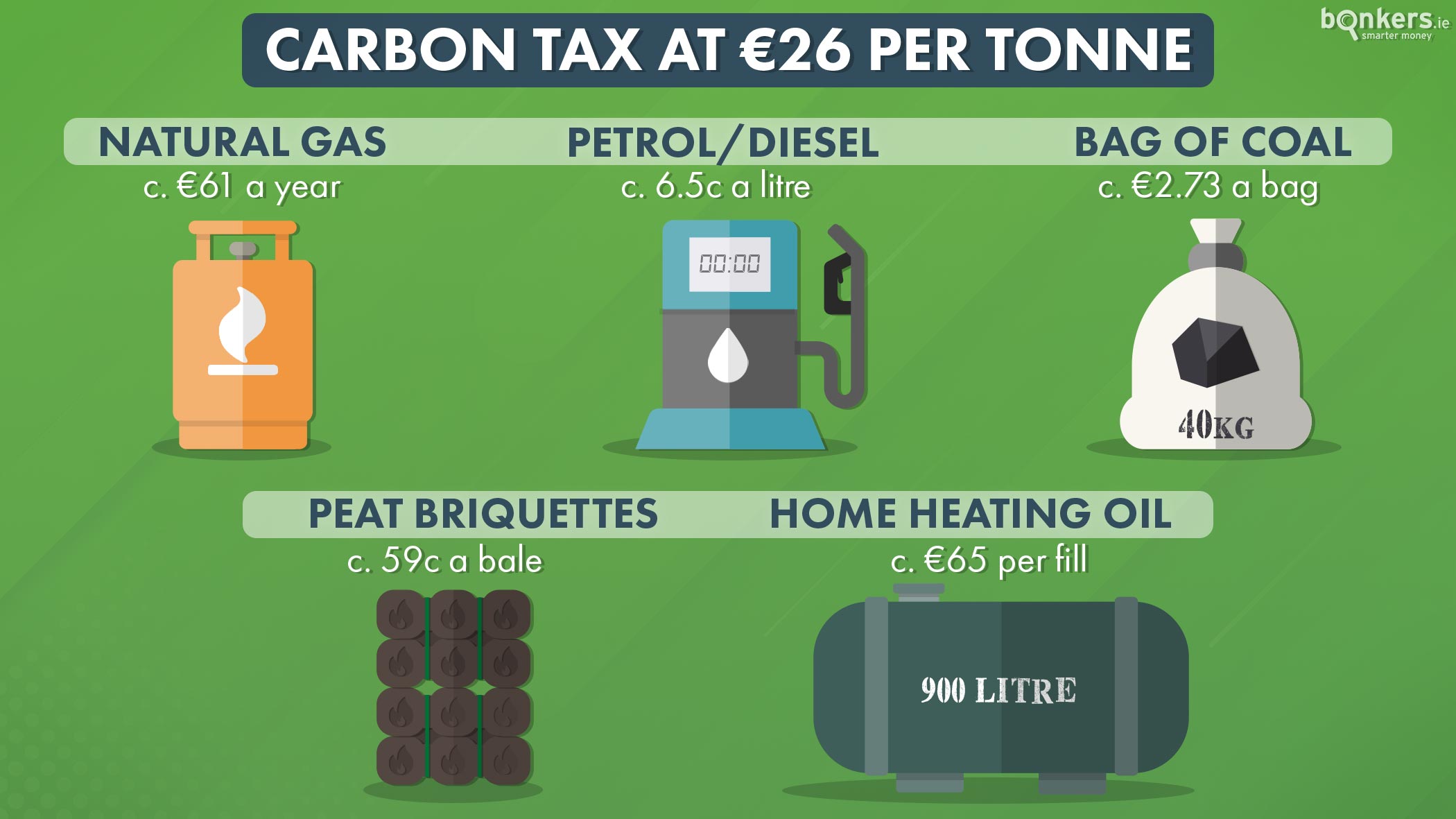 *Based on average annual consumption of 11,000 kWh of gas

The new charge will work out at 0.55 cent (including VAT) for every kWh of gas used. Considering that the average Irish household uses 11,000 kWh of gas every year, the increase in carbon tax will now add around €14 to the average household's annual natural gas bill, or €61 in total.

The total carbon tax being paid on gas works out at around €10 on every bi-monthly bill. However, those in homes with three or more bedrooms or with a lower BER are likely to end up paying more.

A green tax or just naive?

There has been much talk of the carbon tax throughout Irish society at large as to whether or not this taxation approach will work effectively, or whether it's just another tax on already struggling households.

Even still, there is huge debate worldwide as to whether a tax of this nature is effective in reducing CO2 emissions, given people still need to heat their homes and use energy for the most basic of day-to-day tasks.

However, one thing that we do know is that the tax has raised around €3.5 billion since it was first introduced and many hard-pressed Irish consumers will be asking themselves where that money has gone and what environmental initiatives have actually been achieved since the tax was first introduced in 2010.

Despite this, it is quite clear that there is an appetite and willingness from Irish citizens to address pressing issues surrounding our climate and environment, the success of the Green Party in the most recent election indicates just that.

The difficulty lies in finding a balance between more progressive taxation and visible results - which is easier said than done.

If you’re already paying too much for your energy, remember, the only way to cut your costs is to switch suppliers. It’s like we always say, loyalty no longer pays!

The average energy customer could save up to €412 on their energy bills if they switch suppliers today.

Use our energy price comparison tool and see how much you could save.

Let's hear from you

What do you think of the carbon tax? How does it affect you? Let us know in the comments below.