In a recent report from ComReg, it has been revealed that Virgin Media has the lowest number of complaints per customer compared to all other fixed operators. 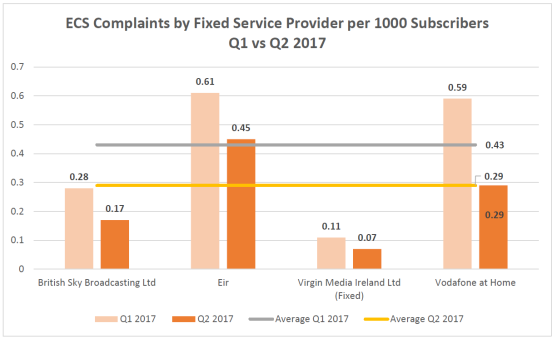 Virgin Media has welcomed the recent publication of the ComReg Consumer Line Statistics Report (Q2 2017) which shows that Virgin Media has the lowest number of complaints per customer compared to all other fixed operators.

“Comreg’s report shows that we’re improving our customer service all of the time with the lowest number of complaints per 1,000 customers compared to Eir, Sky and Vodafone.  Its startling that Customers with our competition endure Comreg complaint rates which are up to five times higher than Virgin Media Customers.”

“At Virgin Media we have reduced our Comreg complaint rate by 50% in the past 12 months and overall we have reduced technical support calls by 30% in the same period.   We’re going to keep driving that level of progress and stay well clear of the competition.”

This is the second instance this year where Virgin Media has come out on top for customer service. Earlier this year, Virgin Media was named Ireland’s fastest broadband network by consumers through the independent network assessment firm Ookla.

Why not compare all deals from the provider across broadband, phone and TV?