Do banks have to charge interest on a mortgage repayment break?

9th Jul, 2020...
covid-19mortgagescentral bank
This article is quite old, you might prefer our latest Banking pieces
Daragh Cassidy
Head Writer

Over 60,000 mortgage holders alone have availed of a payment break since the start of the pandemic.

At the start of the Covid-19 pandemic it became clear that thousands of mortgage holders could have difficulty paying back their loans as large swathes of the economy were shut down and people lost their jobs.

The banks, under pressure from the Government, responded by offering mortgage holders a pause or moratorium on their mortgage repayments for three months. As the crisis continued this was then extended to six months.

However the key point was that interest was still going to accrue on mortgage holders’ loans during the payment break, meaning people could end up paying back thousands of extra euro in interest to their bank.

There’s no such thing as a free lunch as they say! But why were all the banks taking this approach? 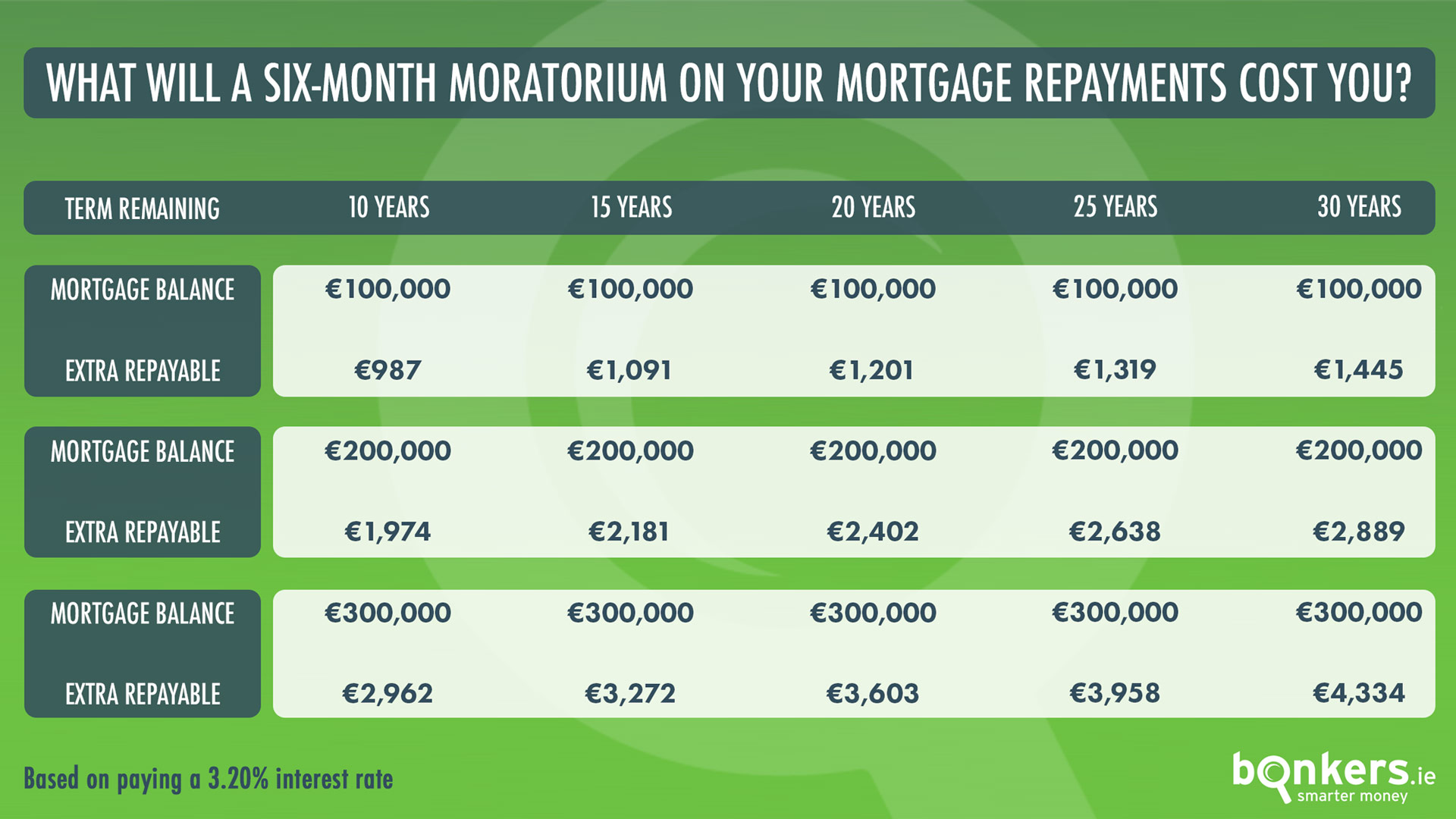 Did mortgage holders have to pay extra interest?

The banks’ reasons for charging interest were two-fold. Firstly, moratorium or payment breaks, which most of them actually offered before Covid-19 anyway, had always accrued interest so they were just following protocol.

But secondly, and most importantly, the banks claimed they had to charge interest under rules and guidelines from the European Banking Authority (EBA) and the Central Bank of Ireland (CBI).

This is because under EBA rules, or so the banks said, a mortgage on which a customer was paying neither the interest nor any of the capital had to be classified as being in default or a non-performing loan (NPL). If this was the case, the bank would then have to set aside extra capital for the NPL and the customer would also have the loan noted as being in default on their credit rating meaning they could have trouble accessing credit in the future.

Banks having to set aside extra capital against NPLs is one of the reasons why mortgage interest rates and banking fees and chargers in Ireland are so high.

Under pressure from the EU and the European Central Bank, Irish banks have been working hard to reduce the number of NPLs on their books over the past few years to improve their financial stability and reduce the risk of needing another bailout. It should also be remembered that the last time the banks had to set aside extra capital for bad loans it was us, the taxpayer, who had to stump up most of the cash. So you can somewhat see why the banks took the position they did....until the recent announcements by the CBI and the EBA.

On 22 June in correspondence to Sinn Féin TD and finance spokesperson, Pearse Doherty, the deputy governor of the CBI, Sharon Donnery, said the CBI had no issue with banks not charging customers interest during the moratorium.

Then on Tuesday the EBA released a document saying banks refusing to charge customers interest would not push the loans into automatic default in their eyes and therefore wouldn’t require the banks to set aside extra capital.

So in short, the banks are pretty much free to decide how they want to treat mortgage holders or indeed any other type of loan holder taking a pause on their repayments.

What has the banks’ response been?

It seems like the recent announcements from the CBI and the EBA have taken the banks somewhat by surprise, although critics are arguing that the banks knew all along what the official policy was and have simply been lying to the Government.

Whatever the truth, the banks are standing firm and have no plans to pause interest payments for the time being even though their previous position that they had to charge interest now seems incorrect.

Not charging interest would cost the banks up to €150 million, analysts at Goodbody Stockbrokers estimate. Mind you, this figure pales in comparison to the bailout taxpayers gave the banks after the Celtic Tiger property crash.

The banks also say Ireland is one of only 10 EU countries offering mortgage holders the option to pause their repayments and that their response has been generous enough.

What should I do?

If you’re one of the 60,000 odd mortgage holders who’s availed of a payment break, or indeed any other type of loan break, you need to be aware that you’ll have to pay extra interest on the months you skipped. This interest that you owe will usually be added on to your monthly repayment when you begin repaying your loan. This means your repayments will now be higher going forward but your loan will still end on the same date.

If you restart your payments as scheduled after six months your credit rating won't be affected. But if you think you'll need a further payment break it may affect it so it's important that you engage with your lender as soon as possible to come up with an agreed solution.