BOI and An Post introduce Apple Pay with PTSB close behind

The introduction of Apple Pay is the second digital wallet to be made available to Bank of Ireland (BOI) customers, with Google Pay having only been introduced in August 2020. It is also the third such wallet now available for An Post current account customers.

The area of technology is one in which there seems no repose, and for the better mind you, with the area of financial technology (fintech) not only budding but in full bloom.

One particular aspect of the fintech revolution is the addition of digital wallets for banking customers, which have been readily adopted in the last four to five years, especially since Covid-19 announced itself in March.

Most retail banks in Ireland have already rolled out compatibility with at least one of the now omnipresent e-wallets, with competition from fintechs Revolut and N26 proving stronger than ever in the space.

However, when it comes to Apple Pay, Bank of Ireland has continued to lag behind a number of other major financial institutions in Ireland, leaving customers tapping their feet (and not their phones) in anticipation...

Customers of Bank of Ireland can rejoice as the bank has finally added Apple Pay for its current account customers.

The wait has been long overdue, with BOI having only introduced Google Pay for its customers back in August of this year.

The addition of Apple Pay enables BOI customers to add their debit and credit cards to the Apple Pay digital wallet.

As well as being able to make secure, contactless payments in-store with any iOS-enabled smartphone or watch, Apple Pay also facilitates spending within apps and online, helping to ensure your spending is faster and more secure.

This is another important addition to our digital payment offering, following on swiftly from the roll-out of the new mobile app, and we look forward to bringing more new features to customers over the coming months.

An Post Money current account customers will be glad to know that they too can now enjoy all the benefits of Apple Pay, alongside Google Pay and Fitbit Pay which had been previously made available to An Post customers.

Customers will now be able to add their Mastercard debit card to their Apple Wallet and begin spending without being subject to the €50 contactless limit on contactless card transactions.

The addition of Apple Pay is another good reason why customers are turning to the An Post Money Current Account debit card. The card has been key to An Post’s move into a wider range of financial services and another example of our commitment to being human about money.

With banks and financial institutions under mounting pressure to cater to customer's advancing technological requirements, one such business hoping to follow in Bank of Ireland and An Post's footsteps is Permanent TSB.

PTSB coming on board

As it stands, customers of PTSB have access to Apple Pay, having introduced it after this article was written. PTSB customers still don't have access to Google Pay however, making it the only major bank in Ireland that doesn't yet offer Google Pay.

This means up until Apple Pay was introduced, many PTSB customers were using the likes of Revolut to make contactless digital payments from their phones or smart watches.

EBS is the only other financial institution that does not yet offer either Apple Pay, Google Pay or both.

If you’d like to add your card to a digital wallet and are unsure as to whether your bank provides for one, take a look at our straightforward table below to help answer your question. 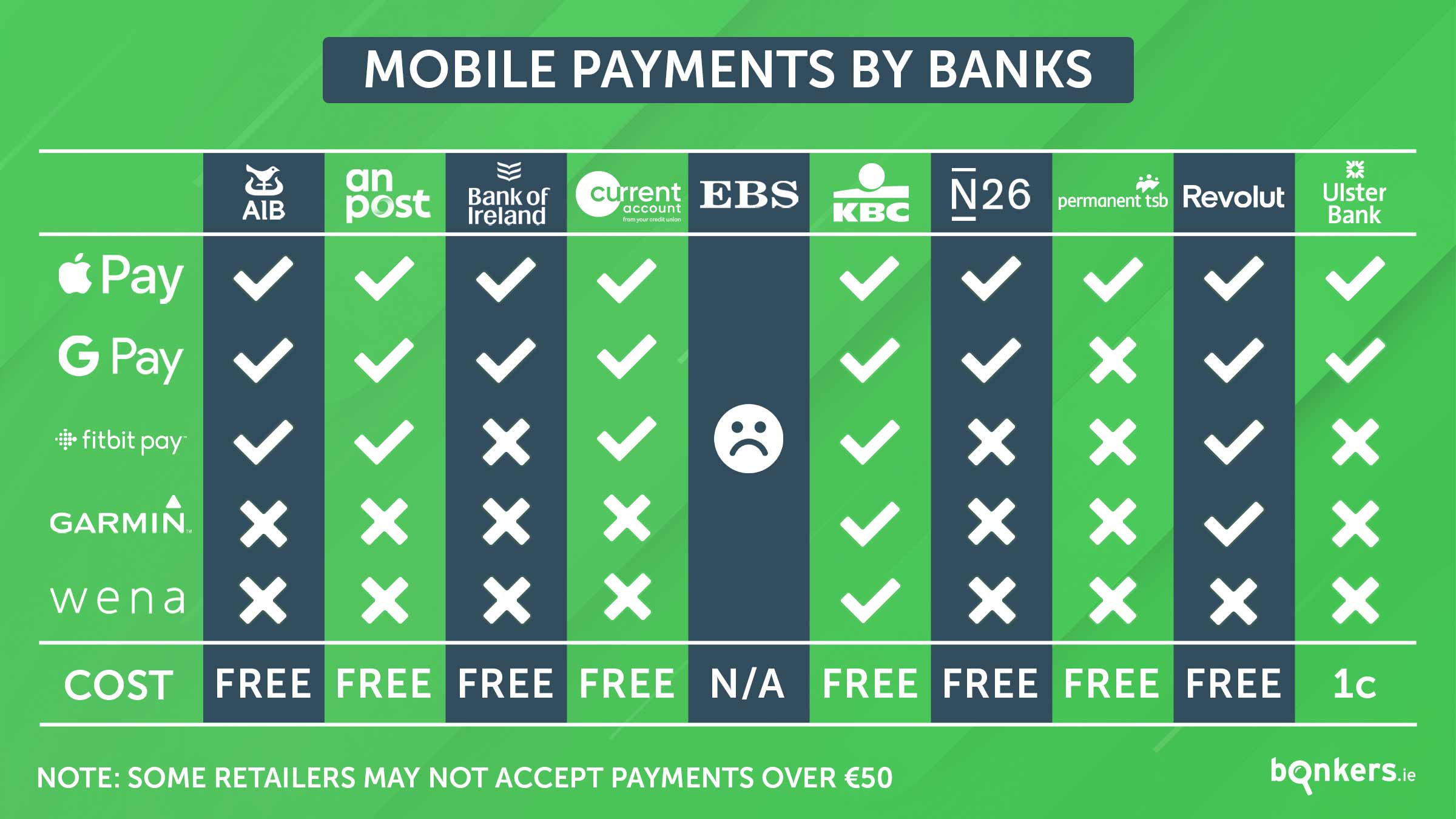 Technology for the times

Digital wallets such as Apple Pay and Google Pay have become increasingly popular and, rather unfortunately, necessary due to the advent of Covid-19 as they allow customers to circumvent having to carry a card, touch keypads, or even having to handle and exchange cash.

Data released from rival bank AIB in April showed a surge in the use of contactless and digital wallet payments in Ireland after the onset of the global pandemic here.

Bank of Ireland, including all other banks who currently provide a digital wallet, do not charge extra for paying with the likes of Apple Pay or Google Pay.

Banks currently treat digital wallet transactions the same as tapping your physical debit or credit card. In other words, BOI customers won't be charged extra for using their digital wallets.

At the moment Ulster Bank is the only retail bank in Ireland that charges its current account customers for contactless card payments (including Apple and Google Pay), but at just 1 cent per transaction it shouldn't break the bank.

Ulster Bank also further improved its digital offering recently with the launch of a host of new payment control features in its mobile banking app, aimed at taking on online banking competitors such as Revolut. 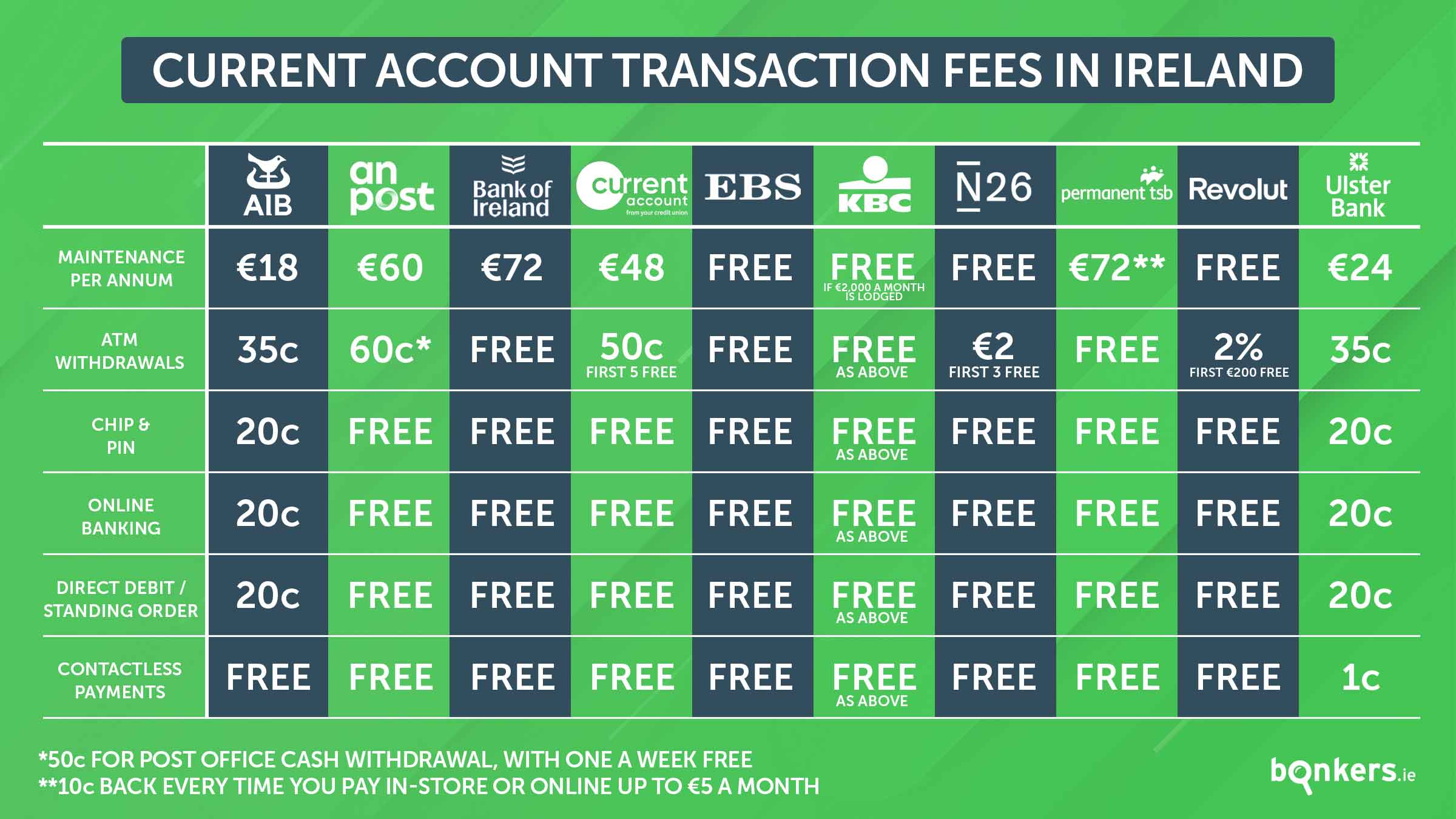 If you’d like to switch current accounts to a provider who supports digital wallets, or if you’d simply like to save some money on your banking costs you can use bonkers.ie to compare the best current account options on the market.

Use our current account comparison tool online to compare all the best current accounts across all providers in the market - it only takes a couple of seconds when you compare with bonkers.ie.

Take a look at the recent piece we wrote on who is offering the best value current accounts at the moment, or listen to our bonkers.ie podcast episode where we take a deep dive into current accounts.

Since Bank of Ireland and An Post introduced Apple Pay, there have been several developments in the digital banking sector:

You can stay up to date with all the latest banking and personal finance news with our blog.

Do you have any questions about BOI's announcement? Need some more information about digital wallets and how they work? Find out all you need to know by asking us a question in the comments below! We'd be happy to get back to you.