Minimum unit pricing on alcohol has finally come into force. Here we look at how it might impact on your pocket.

It’s been a long while coming but the introduction of Minimum Unit Pricing (MUP) on alcohol, which was officially approved by the Government back in May, has finally come into force.

While there has been some confusion as to how much it will end up costing consumers, in this article we’ll help to simplify things and take look at how much the new measures will likely add to your favourite tipple.

So, first and foremost!

The Minimum Unit Pricing plan, or MUP, is a provision within the Public Health (Alcohol) Act 2018.

In short, it's a targeted public health measure that bans the sale of low-cost alcohol by setting a minimum price floor under which alcohol cannot legally be sold.

It's calculated by charging an extra 10c per gram of alcohol. So the impact on people's pockets will depend on a particular drink’s alcoholic percentage strength as well as the size of the drink.

Importantly, MUP should only affect drink bought in off-licences and bigger retailers such as supermarkets. It shouldn't have any effect on the price of alcohol in pubs, restaurants or nightclubs as the prices in these establishments are already well above the price floor set by the guidelines.

When is it coming into effect?

MUP will come into force from 4th January 2022. This is despite the bill being passed by the Oireachtas all the way back in 2018.

The bill in question had been before the Dáil since 2015.

What will it cost?

There has been some confusion as to how much the introduction of Minimum Unit Pricing will cost consumers.

Here’s what you need to know.

The new price will see an extra 10c charge per gram of alcohol. This price can also be increased down the line by successive governments.

The calculation to find out how much each drink will cost is quite complicated, so to make things a bit clearer, here’s what the cost of the most popular tipples will look like come January.

When it comes to beer and lager, a 440ml can of lager at 4% strength will cost a minimum of €1.32 from January while a 500ml can at 4.3% will cost €1.70. However many beers are of greater strength, meaning the minimum price will be even higher.

If you look at multipack beers for example, particularly those with a higher volume such as 5%, consumers will be paying far more. Take an eight pack of 5% beer sold for €12. The individual price per can is currently €1.50, but under MUP each can will cost €2.10 so a total cost of €16.80. 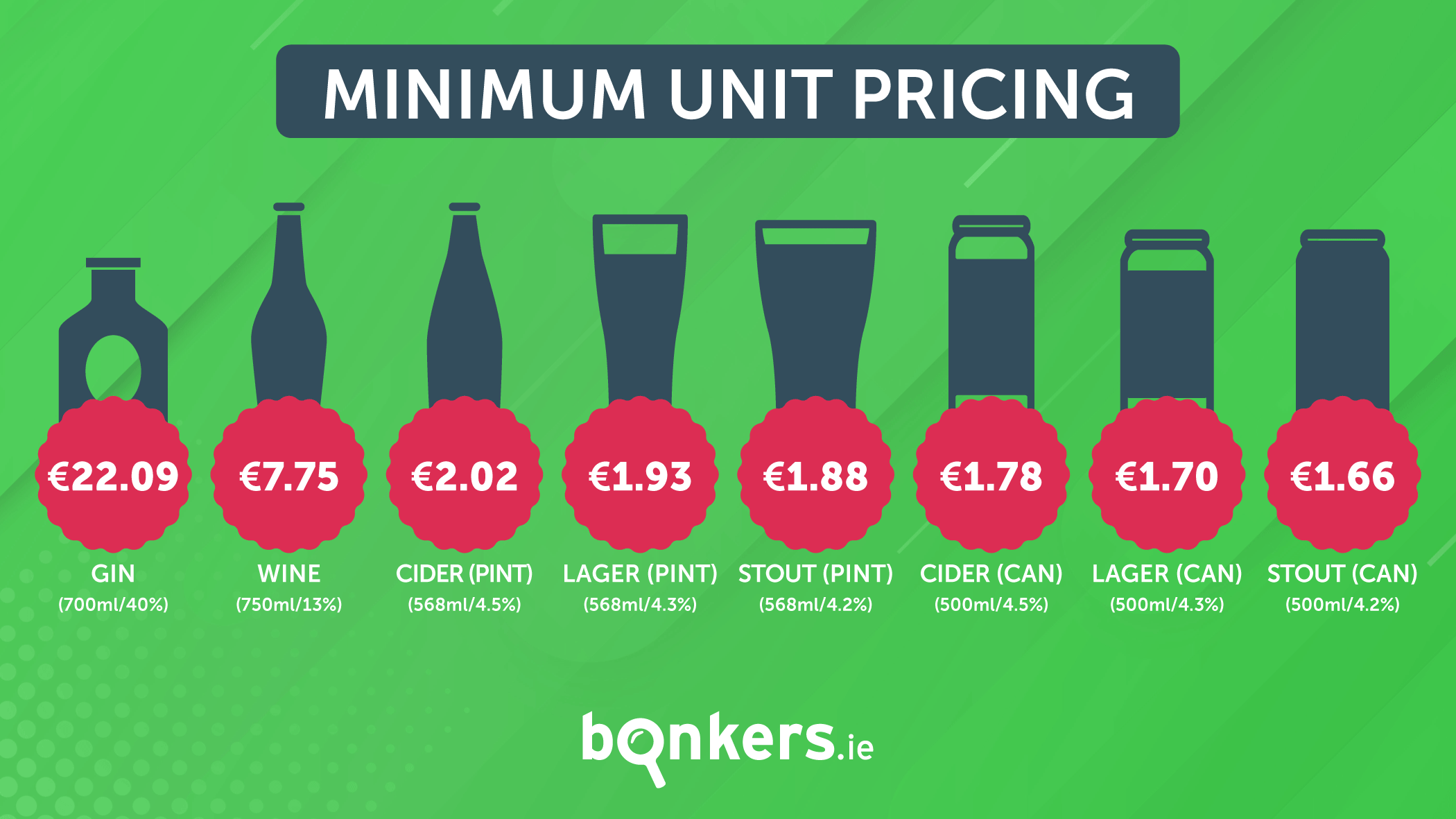 Will all prices go up?

The price of more expensive alcohol will not increase in line with the cost of cheaper products. For example, the cost of a €15 bottle of wine will not change, as it is already above the price floor set by the new law.

However, in reality, what will probably happen is that the cheaper €6 or €7 bottles that we've become accustomed to will no longer be available.

Why bring it in?

As we mentioned above, the provision of Minimum Unit Pricing is a public health measure aimed at reducing the levels of alcohol consumption in Ireland by making alcohol, specifically very cheap alcohol, more expensive.

The latest figures from the Health Research Board (HRB) in Ireland show that in 2019, on average every person in Ireland aged 15 and over drank 10.8 litres of pure alcohol a year, which is the equivalent of either 40 bottles of vodka, 113 bottles of wine or 436 pints of beer. They're pretty crazy numbers.

Furthermore, the same research has shown that Ireland ranks 9th among OECD countries in terms of alcohol consumption and 8th in the world when it comes to monthly binge drinking.

Making the announcement at the Department of Health, Minister Stephen Donnelly said:

We're acting to address the health harms that are the result of patterns of alcohol consumption and are doing this through preventing the sale of strong alcohol products at very, very low prices.

Meanwhile, Tánaiste Leo Varadkar said that the minimum pricing is not targeted at "most people" but toward "heavier drinkers" and "those who tend to seek out the cheapest alcohol, particularly children seeking to experiment with alcohol for the first time."

The Irish Government planned on bringing in MUP at the same time as the government in Northern Ireland but government there is yet to bring it in. It's expected some time in the next number of years.

Some concern has therefore been raised about the availability of much cheaper alcohol being available across the border. Even before MUP, alcohol is generally cheaper up North and there are concerns MUP will lead to an increase in cross-border shopping, impacting on local retailers and jobs.

That being said, Scotland introduced MUP in 2018 and evidence from research conducted by Health Scotland at the end of 2019 showed that while there was indirect evidence suggesting MUP-driven cross-border purchasing behaviour, it generally involved individuals shopping for themselves rather than engaging in bulk purchasing of cheaper alcohol.

Interestingly, NHS research also found that the amount of alcohol being sold in Scottish shops decreased in the year after MUP had been brought in. The research by the health service found that the volume of pure alcohol sold per person dropped by 3.6% from 7.4 to 7.1 litres. So it will be interesting to see how the new measures change behaviour here in Ireland, if at all.

Any measure that looks to improve public health is to be welcomed on the whole. However, it does leave a lot to be desired from the perspective of personal choice, not to mention the increased costs put on consumers at large.

Let us know what you think!

Do you agree with the new measures announced by government? Do you think people will end up paying more and drinking less? Let us know in the comments below.