Do your bit for the environment as well as your pocket by following these 12 simple tips.

We may think it always rains in Ireland but parts of the East in particular receive less rainfall each year than many other European cities.

Plus, cleaning and treating water so that it's fit for household consumption isn't cheap.

In short, clean water is a precious resource which shouldn't be wasted.

And remember that around 30 to 40% of the average household’s entire electricity bill is for heating water. So using less water can also save you money!

The old mantra that a shower uses way less water than a bath is only partly true.

With ‘rain’ shower heads and high-pressure shower heads all the rage these days, a long soak in the shower can end up using almost as much water as a bath.

If you don’t believe us just keep the plug in the next time you go for a shower and see how much water you actually use.

But while having a shower over a bath is usually preferable, remember these tips:

2. Use the dishwasher properly

Dishwashers actually use less water than washing by hand and they’re more hygienic too. So don’t be afraid to use yours. However remember the following rules:

3. Only boil what you need

Most of us coffee connoisseurs and tea addicts know that you’re supposed to only use fresh water with every brew if you want the perfect cup.

However most of us have a tendency to overfill our kettles and coffee machines, meaning we often throw out old water every time we make a new cuppa.

So only fill the kettle or pot with as much water as you need. You’ll waste less water and save money on your electricity costs too.

This is an obvious one but needs repeating as a running tap uses about 6 litres of water a minute.

When brushing your teeth and washing your hands don’t leave the tap running. And when shaving, just fill the sink with a few inches of warm water. This will rinse your razor just as well as running water, with far less waste.

Remember, if you leave the hot tap running you’re literally pouring money down the drain.

If you’re cooking with oversized pots and saucepans then you’ll end up using far more water than you need to.

Consider investing in some super small 10cm to 14cm saucepans for when you only want to boil one or two eggs or cook a small amount of pasta using the minimum amount of water.

You’ll save time, water, and money.

Also, steam your vegetables instead of boiling them. You’ll use less water and it’ll help your food retain more of their nutrients. A real win-win.

6. Invest in some rainwater storage devices

If you have a garden and are worried about how your rose bushes and petunias will fare without a bi-weekly watering, invest in some rainwater storage devices. This doesn’t need to be anything elaborate and can be something as simple as leaving out a few plastic containers on the driveway to capture any rain that does fall.

Look at ways to reuse your water rather than pouring it all down the drain. For example if you’re running water to wash your fruit and veg, capture it and use it for watering your plants.

When you’ve finished boiling your eggs in the morning, once the water has cooled down you can use it for the garden too.

And when washing your hands, if they’re not too dirty, keep the plug in the sink and use the water for shaving or washing again at a later stage.

If you’re running the hot tap and waiting for the water to warm, don’t let it go to waste down the drain. Capture it and use it for washing your car or watering the plants. 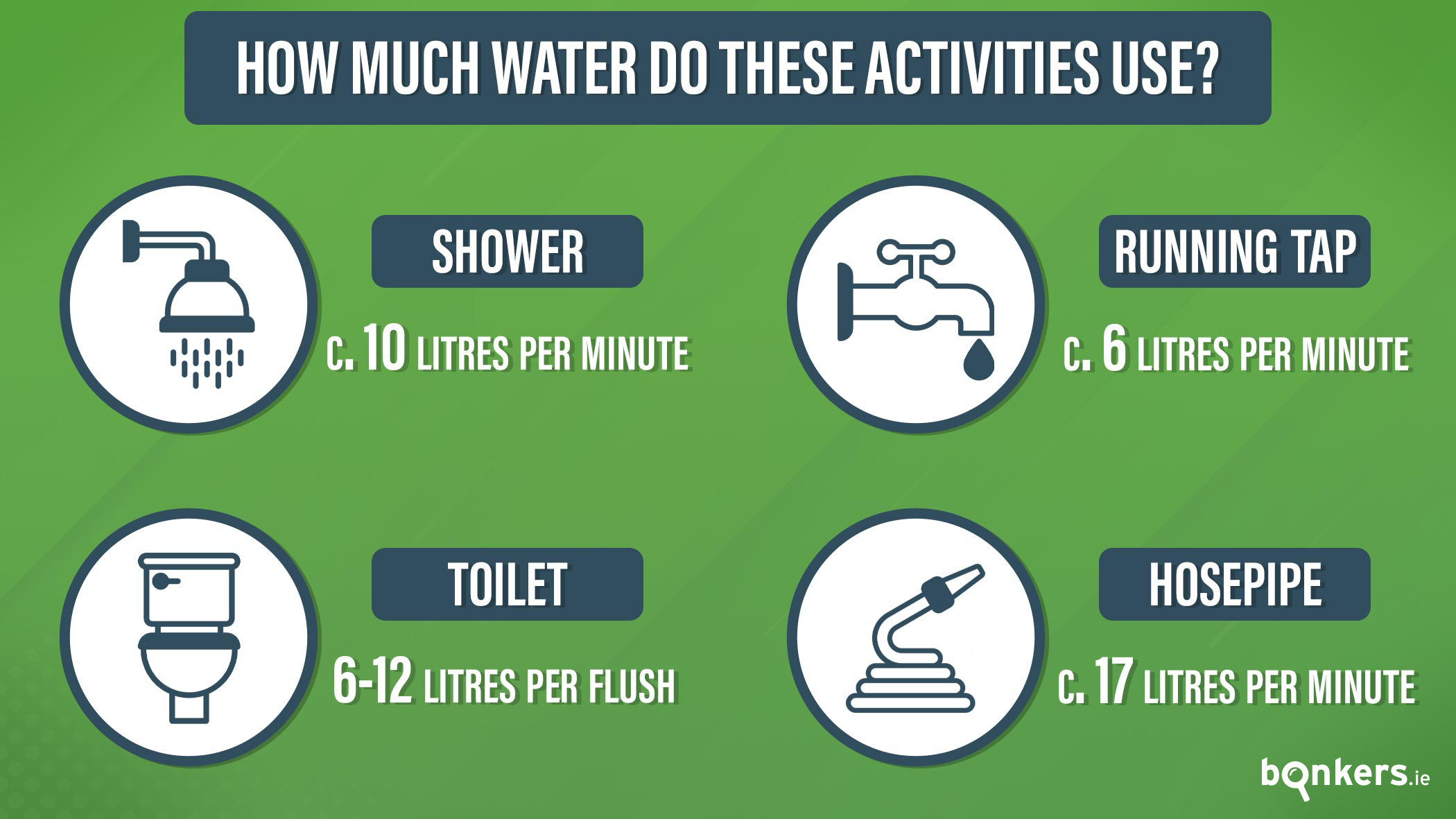 When you’re watering your plants, do it early in the morning or late in the evening so that less water evaporates in the midday summer heat. And direct your watering at the plant’s roots where it’s most needed. And as per our previous points, try reuse your household water for your gardening.

If you buy a large load, high-efficiency washing machine, not only does it mean you'll be doing fewer washes, it also means that you'll be using less water in the process.

These machines use about 40% less water than regular machines. The key to their savings is that the tub does not get filled up; instead clothing is flipped and spun through streams of water and repeated high-pressure sprayings.

And as up to 90% of the electricity that a washing machine uses is for heating the water, you'll save on your energy bills too!

Yes we know this one might freak some people out a bit but consider if you really need to flush the toilet after every single use.

Older toilets use a staggering 12 litres or so per flush. Even newer cisterns (those installed in the last ten years) use about six litres per flush.

And if you can’t invest in a new eco toilet, just put a plastic bottle filled with water in your toilet tank to reduce the amount of water used per flush

12. Put down the hosepipe

There’s a reason why we refer to hosepipe bans when we talk about water rationing. A running hosepipe uses about 17 litres of water a minute.

In one hour, a hose will use more water than the average family uses in a day.

So if you need to water the garden or clean the car, put down the hosepipe and do it by hand instead.

Looking to save more?

Here we’ve just discussed how you can cut down on your electricity bill by reducing how much water you use in your home. However, there are many other ways to cut the cost of your bills. Take a look at the following if you want to know more:

Have you tried any of these tips to use less water? Do you have any other suggestions about how to reduce water usage? We’d love to know!

How to save money this Christmas

How to save money this Christmas