12 ways to reduce your carbon footprint and save money

Eir to start charging for its email service

Death and taxes is a well-worn phrase at this stage so here's a list of 10 ways to pay as little of it as legally possible.

You may have seen a short video that went viral a couple of weeks of a child sat on the floor as a parent recorded him weeping. What he says is unintelligible at first but it's clear that he has just lost at Monopoly, as he weeps his mother says:

But seriously we all despair a little when we receive our payslips and see how much more money we could be getting each month, so we are here to salve that discomfort by giving you some advice on how to pay as little to the taxman as you need to.

From keeping good records and claiming for medical expenses, to keeping abreast of all the tax credits you're entitled to, there’s a lot to unpack, so let's dig in...

The first part of not paying more tax than you have to is keeping your paperwork in order. This means keeping receipts of all your medical expenses, doctor's visits, and work-related expenses if you're self-employed.

2. Avail of all the tax credits available to you

Tax credits might sound complicated but in reality they're not. A tax credit works by reducing the amount of tax that you pay by the size of the tax credit. So a €500 tax credit would reduce your yearly tax liability by €500. A €1,000 tax credit means you pay €1,000 less in tax and so on.

There are lots of tax credits available yet it would amaze you how many go unclaimed every year.

For instance, most people are unaware of the home carer tax credit. This tax credit currently stands at €1,600 per year, having been increased by €400 in the last two budgets, and can be claimed by any married couple or civil partnership where at least one of the spouses is a stay-at-home carer for either a dependant or their own children.

There is also the age tax credit. This is in addition to the personal tax credit that all workers are entitled to and may be claimed once you or your spouse or civil partner reaches the age of 65. If you're single or widowed it's €245 and if you're married it's €490.

So when it comes to the end of the year, or whenever it is that you do your admin duties at home, you should research all of the available tax credits available to the public and figure out which, if any, you qualify for.

Certain professions can also claim for expenses (namely tools, uniforms and stationery) that are incurred as part of carrying out their day-to-day work. These are called flat-rate expense allowances.

For example a nurse who supplies and launders his or her own uniform can claim a tax allowance of €733. And a skilled worker in the engineering or electrical industry who bears the full cost of their own tools and overalls can claim an allowance of €331.

Other expenses can be claimed simply by being in a certain profession with no discernible expenses needing to be incurred in order to claim. For example journalists can claim a €381 allowance, firefighters a €272 allowance, dentists €376, and waiters and waitresses €80. Airline cabin crew, hospital staff, bar staff, and brick layers can all claim tax allowances too. The full list be be found here.

Flat rate expenses can be claimed in minutes online by completing a Form 12 in Revenue's myAccount service.

4. Claim for your medical expenses

One of the most commonly unclaimed tax reliefs is for medical expenses, where 20% can be claimed back - providing the money hasn't already been reimbursed through another source source such as your health insurance for example.

Non-routine dental expenses like braces are also covered although things like fillings, scaling/cleaning and tooth extraction are all considered to be routine dental treatments, so won't be reimbursed unfortunately. However lots of other day-to-day medical expenses such as GP visits, consultant fees, prescribed physiotherapy and counselling sessions, acupuncture, routine maternity care, hearing aids, and IVF are all covered.

Again, expenses can be claimed back in minutes online through Revenue's myAccount service. As per our first point, remember to keep your receipts as you may be required to show them as proof at a later stage if Revenue decides to check your claim.

5. Get a refund on tuition fees

Tax relief at 20% is also available on eligible third-level tuition fees. Here the relief is available to the person who has paid the fees, not the person who's studying. So this means you can claim tax back on your children's tuition fees as well as your own if you go back to college.

The relief is available on both part-time and full-time courses.

However the relief only applies to amounts above €3,000 up to €7,000 per third-level course per year. Also, no relief is available for examination, registration, or administration fees. Unfortunately this means most standard undergrad courses won't be eligible for relief. However if you or your children go on to study a master's or post-grad course, where fees can easily reach up to €7,000 a year or more, then tax is there to be claimed back. 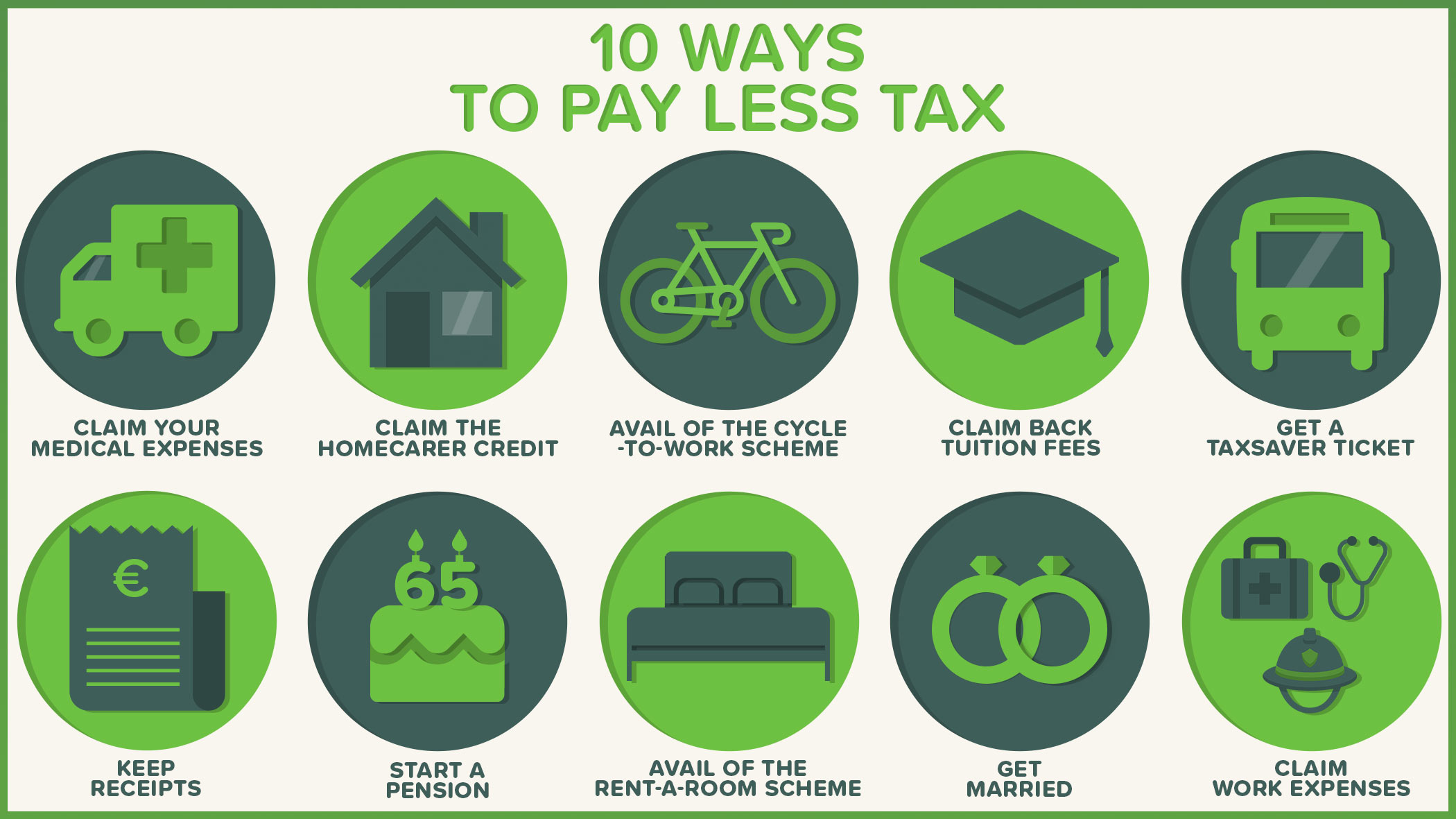 Getting married is romantic and all, but most of the time it makes great financial sense, particularly if one spouse earns far more than the other. This is because you can split your tax credits between you.

Most PAYE workers are entitled to a €1,650 personal tax credit as well as a €1,650 PAYE/employee tax credit. Remember a tax credit simply reduces the amount of tax that you pay by that amount. So this means a PAYE worker can earn €16,500 a year before they start paying 20% income tax (as up until this point the €3,300 combined tax credit would more than offset the tax due).

However if you're earning a lot more than your spouse and/or your spouse isn't using up all of their tax credits, you can transfer some of your spouse's credits over to you to reduce your overall tax liability as a couple.

This might sound a bit complicated but the simple point to remember here is that the Irish tax system greatly favours married couples over single people so if you're recently married make sure you're taking full advantage.

Pensions are a fantastic idea that you can't take seriously early enough. They are a great way of gaining financial security and protecting your future. But they don't just make sense for that reason alone; pensions are extremely tax-efficient as any money that you save into a pension is exempt from income tax up to a certain limit.

What this means is that if you were to save €100 a month into a pension, you won't pay any income tax on that €100. So if you're a higher-rate taxpayer a €100 monthly contribution will cost you just €60 in net terms (the other €40 which you’re putting into your pension would otherwise have been taken from your payslip in income tax).

So as well as providing for your future, pensions allow you to give away less of your hard-earned money to the tax man. A real win-win.

8. Avail of the rent-a-room scheme

If you're lucky enough to own your own home and luckier still to have a little bit more space than you need, then you can get some much-needed help in the tax department.

Under the rent-a-room scheme you're allowed earn up to €14,000 a year entirely tax free by renting out a spare room in your home. This differs hugely from Airbnb where all the money you receive will be subject to income tax at your marginal rate (so 40% if you earn over €35,300 a year) with the online platform now sharing booking details with Revenue to ensure the appropriate tax is paid!

The Cycle-to-Work Scheme was launched in 2014 and aims to encourage employees to cycle to and from work. Under the scheme your employer can pay for bicycles and bicycle equipment for you which you pay back through your salary over a period of up to 12 months. You then don't have to pay any income tax, PRSI or the Universal Social Charge on your repayments.

There is a limit of €1,000 per bicycle purchased and the purchase can be made in any cycle shop.

So if you're a higher-rate taxpayer and you purchase a new bike for €1,000, it'll only cost you just over €500, spread out over 12 monthly payments.

10. Get onboard with a Taxsaver ticket

Similar to the the Cycle-to-Work Scheme, the Taxsaver scheme incentivises people to use public transport to and from work. Again, under the scheme your employer pays for your public transport ticket which you pay back through your salary each month. You then don't have to pay any income tax, PRSI or the Universal Social Charge on your repayments meaning you can make big savings and pay less tax!

12 ways to reduce your carbon footprint and save money

Eir to start charging for its email service