Sky announces the introduction of Sky VIP, the first tenure-based loyalty programme in the TV and broadband sector. A four-tiered programme, the premise is simple; the longer you’ve been a customer, the better the rewards become.

Whether you’re a long time customer of Sky TV or you only signed up yesterday - we’ve got some good news for you! Sky TV today launched Sky VIP, a new loyalty programme that rewards customers for being with Sky.

The programme was developed following extensive customer research and feedback, which revealed that Sky customers are looking for a variety of rewards.

So how does Sky VIP work?

Sky VIP uses a four-tiered system based on the length of time customers have been with Sky. The four tiers are Silver (0-3 years), Gold (3-8 years), Platinum (8-15 years) and Black (15+ years). Each tier gives more new benefits, as well as access to the rewards in the previous levels. Customers who’ve been with Sky the longest will be able to access all of the rewards and benefits on offer.

Here’s a breakdown of each tier: 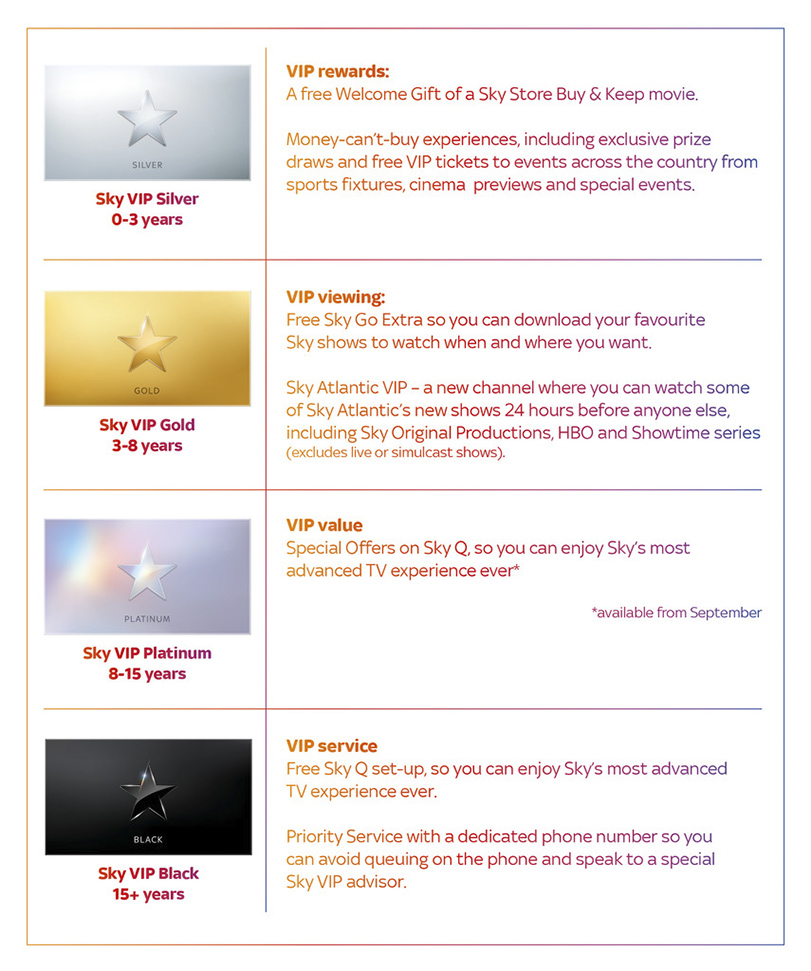 How do I get Sky VIP?

Customers can join Sky VIP via the My Sky app to discover the range of personal rewards available to them. On joining, all customers can access a free welcome gift of a Sky Store movie and find out their membership tier, based on the length of time they’ve been with Sky.

What can I expect from Sky VIP?

Some of the initial rewards on offer to all customers as the programme launches are:

If you’ve been with Sky for a good while, the rewards also include special offers to get the best out of Sky for less. The initial rewards on offer include:

The launch of Sky VIP follows the successful launch of Sky Italia’s loyalty programme and last year’s Christmas gift to customers in both Ireland and the UK, which gave Sky TV customers Sky Box Sets for three months or a Sky Store Buy & Keep voucher.

Speaking about the programme, JD Buckley, Managing Director, Sky Ireland, said: “Sky VIP is our way of saying thank you to our customers for their continued loyalty. Whether they’ve recently signed up to Sky or whether they’ve been with us for over fifteen years, our reward system recognises everyone.”

“On top of amazing prizes from and access to the world of sport and entertainment, customers will also enjoy added value and priority service. This is just the start of Sky VIP and we plan on rolling out bigger and better prizes as the programme develops in the coming months.”

Not a Sky customer?

If you like the sound of Sky VIP but you’re not a Sky TV customer why not browse some of Sky’s TV packages? The great thing about the new programme is that you can start benefitting as soon as you become a customer.

If Sky’s not your thing, why not compare all TV packages and see what’s the best fit for you.