Is it really worth shopping around for cheaper car insurance?

On Valentine’s Day, I got an unexpected call from my car insurance broker. Not the most romantic of calls in fairness, but he did seem to be genuinely concerned about me. It seems that my policy was almost up and he just wanted to make sure I wouldn’t be motoring about without any insurance. Bless him I thought.

He asked if I’d been getting the renewal notices his company had been sending to me?

Now I’m not much for opening the post, but as I eyeballed the heap of unopened business-y looking envelopes in the corner I said “Ermmm... probably? Why don’t you give me the bottom line?”

And with that he was delighted to tell me that for just €522 I could renew my policy with the same level of cover for another year. And of course he could take care of everything right then and there over the phone.

Now I wrote about this whole renewal malarkey a couple of years ago, but this was the first time I’d been called up like this for my renewal. A new development I thought to myself... so I decided to ask some questions.

“Is that not a bit high?” I said, “I’m sure I didn’t pay that much last year... can you save me the trouble of going back through my records (ahem) and tell me how much I actually did pay last year?”

Well, there was a bit of clickety-clack and “let me see...” as he made some small talk and dug out the number. I imagined him shuffling papers on his desk too, but eventually he coughed it up - €419.

No wonder he was slow to tell me how much I paid last year.

I pointed out that I hadn’t been involved in any crashes, I only drove on weekends, my car was old and not worth much, and I’d clocked just 3,000 miles in the last year. And I’m not a teenager for goodness sake - I’m 42!

Needless to say, I advised my friendly broker that I would not be taking up this renewal offer at this time. And convinced I could do better I set about to get that €522 back down to something a little more respectable.

The first stop was to dig out my renewal letter. I rummaged through my pile of unopened post and quickly found a big Chill Insurance envelope. Could there be something in it that explained why the cost of my insurance had gone up by 25%?

Well, it turns out that the delight didn’t stop with the agent. It continued with the renewal letter too...

“We are delighted to confirm, that after speaking with over 14 different insurers, we have identified a price of €522.86... with Zurich. Your existing underwriter is offering a premium of €694.30 so the saving is good news for you.”

Saving? Good News for me?

Knowing that Chill wouldn’t have the information I was looking for, I decided to call KennCo, my existing underwriter, and ask what gives. They sell their policies through brokers only, so they don’t really like to deal with the plebs directly. However, with a little effort I was still able to get through to a lady called Anna, and she kindly explained that I needed to go back to my broker (sigh). I did persuade her to listen to me for a couple of minutes though, and I read her the “saving” paragraph from Chill.ie. She seemed genuinely surprised that my premium had gone up by so much and said she’d check it out for me and call me back. So far so good.

So while I was waiting for Anna to call me back, I figured it was time to arm myself with quotes from some other insurance companies.

First stop Allianz.ie because they promise 14% off new policies online. I filled out a lengthy form and for my effort I was rewarded with a quote of €626.88. Not going well so far...

Next up Liberty. I had insurance with them back when they were Quinn, and my wife has a policy with them, so I was hopeful when I made the call. I got through to a cheerful chap called Donny and quite enjoyed the process of getting a quote. He put in for a multi-car discount, was able to pull my previous records and used my no claims information. He worked the system as best he could, but when we got to the bottom line, he dropped a quote of €1,106 and put a swift end to fun.

He asked how I felt about €1,106 today? I asked if it was a comedy quote since it was both hilarious and more than double what Zurich were looking for. He assured me that he was quite serious – and not taking the Michael at all.

I asked Donny if he had any idea why the quote was so high, but he said not really, it was just what the system popped out after all my stuff went in. “Although, maybe the actuaries have seen a spike in people crashing old Hondas like yours?” he offered. Hmmm... interesting I suppose... and maybe someone has to pay for the massive Liberty Insurance advertising budget too I thought.

This really wasn’t going well so far. I was beginning to feel like I was shooting craps on a losing table and my number just wasn't not coming up. Wasn't I was supposed to get cheaper insurance this year on account of gender equalisation? Shouldn't my premium be cheaper now since insurance companies aren't allowed to discriminate against men anymore? Seemingly not in my case.

Ok, I though, time to see what the AA could do for me. I called in and quickly got through to the very businesslike Sarah who bashed through the questions in rapid-fire fashion. Perfect. I wasn’t in the mood for chit-chat anyway.

Once the interrogation was over, Sarah popped me on hold while the system did its thing. When she came back she said she had quotes from three insurers and went through all the wonderful features of the cheapest policy. A long preamble from a lady of few words? This could only mean bad news... and it was. Best quote €650.22 from Allianz.

“But hang on a sec,” I said. “I just got a cheaper quote on Allianz.ie!” Not the same thing at all she said. Different companies altogether apparently.

Well, I told her that was way more than my €522 renewal quote with Zurich and I wasn't interested. So she asked me to hang on again while she went to see what she could do... A few minutes later and armed with a new business discount, a one-time credit and a “valid until the end of the today only” deal, she had the quote down by more than a hundred euro to €536. Now we’re getting somewhere.

And then Anna from KennCo called me back. Turns out that there was some sort of glitch in the way my quote was presented to Chill.ie which added at least €100 to the quote. Apparently, Chill should have received a quote of €533 for me she said. Still considerably more than last year’s €419, but again, we’re getting somewhere.

And then Anna provided some interesting insider insight. Just as Donny from Liberty thought, the problem is most likely my car. It has a high vehicle grouping apparently - a phrase I’ve never heard before - but I have certainly learned lots during this wheeze.

Anyway, the whole vehicle grouping business can slap loads onto the cost of car insurance. And in certain years, certain groupings fall out of favour. The bottom line for me is that insurance companies just don’t like old Hondas with big engines right now, even if they are driven by careful old geezers like me.

So, Anna said she’d call Chill and get them to call me before the close of business. Hopefully they’ll come back with a shiny new quote and make me happy I thought.

Well, at 5:55pm I got a call from Michael at Chill.ie. He said they had heard from KennCo, they wanted to offer me the new price and did I want to go ahead with it? Now, not being totally sure what the new price was, I asked if it was the €533 that Anna had mentioned to me earlier?

“No” said Michael cheerfully, “it’s much better than that. We can renew your policy with the same cover for €479.70.”

“Excellent, I'll pay for that right now,” I said as I pulled out my credit card. And the funny thing is, I was actually delighted.

It’s well worth calling around for a quote. Treat that renewal letter like a guide, you can do better!

Insurance companies are not all the same. Some don't like you or your car, some do.

The difference in price can be extraordinary for what is essentially the same cover. I was quoted €522 by one company, €650 by another and then an eye-watering €1,106 by another!

Just questioning the premium cost can get you a discount. The AA knocked off nearly 20% just because I didn't like their first quote.

I now know that I got a terrific deal when I did this exercise last year, so my benchmark was set very high. I didn’t manage to get down to my target of €419, but I still did ok this year. I beat my renewal which was the purpose of the exercise, and most importantly, I’m satisfied that I’m not overpaying for my insurance.

Turns out that my initial renewal quote of €522 from Zurich through Chill.ie was actually pretty good when compared to the rest of the market but a bit of spade-work still knocked a few shekels off.

I’m happy to stay with Chill.ie and KennCo. They were really helpful last year after a hooligan with a hammer did a number on my car, and sometimes good service really does make a difference. 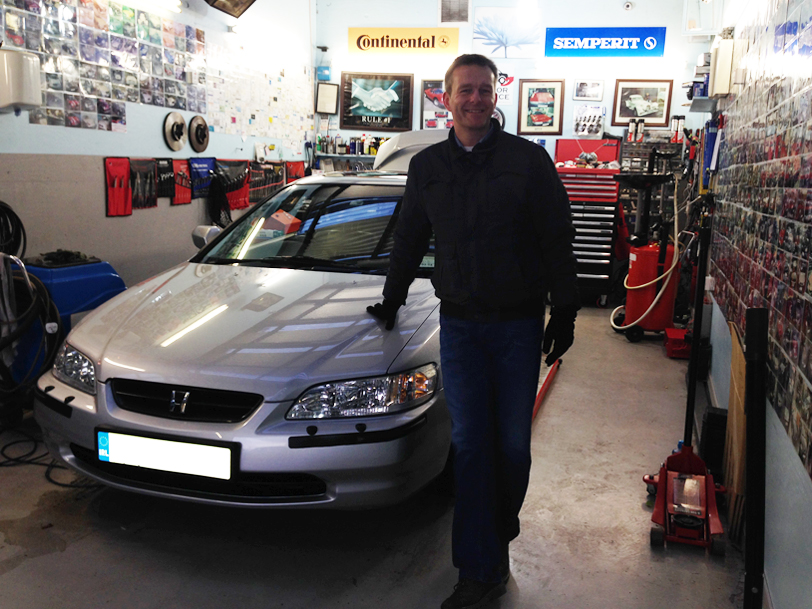 Me and the offending machine at Sam's Car Service in Blackrock

8 things to know before taking out gadget insurance

Consumers encouraged to shop around amidst rising health insurance costs

Motor insurance premiums drive 42% higher, despite falling cost of claims, according to CBI