PSO Levy to increase by 20% for all households

The Commission for Energy Regulation has today announced that the Public Service Obligation Levy will increase from 1 October 2016. The PSO Levy is a government subsidy that is charged to all electricity customers and supports renewable energy generation. It is also used to secure the Irish electricity supply.

The CER has today announced that the PSO Levy is to increase by just over 20% from €68.20 to €82.04. The increase, which will take effect from 1 October, will add almost €14 per year to household electricity bills when VAT is included.

The PSO Levy is a charge that all domestic and commercial electricity customers pay. The proceeds raised go to a variety of schemes related to renewable energy generation, ensuring that our electricity supply is secure, and subsidising the use of indigenous fuels like peat to generate electricity.

So why is the PSO Levy increasing by so much?

Well, wholesale electricity prices are down 27% since last year. So if you’re generating electricity, you’re getting a lot less for it on the open market that you used to.

Some renewable electricity generators are in a scheme called REFIT and have guarantees that they will be paid a certain price for each unit of electricity that they generate. Right now the wholesale price of electricity is around 3.75 cent per unit, but if a generator has a guarantee to be paid 7 cent, the difference will be made up by funds from the PSO Levy.

Back in May, the CER actually proposed a 32% increase in the PSO Levy which would have brought it to €440.9. They’ve revised their estimate of the amount needed because they are predicting that electricity prices are going to increase in the coming year – so less will be needed to subsidise those REFIT generators.

Other factors driving the increase in the PSO Levy

The renewable energy revolution continues apace in Ireland and the CER expects that there will be an increase of 33% in the number of renewable generation plants qualifying for PSO payments in the coming year. This of course will require more subsidy money.

Ireland has generated 21% of its electricity from wind since the start of the year, and on 9 July an extraordinary 54% of the country’s electricity needs were met by wind power. The development of wind as an Irish energy resource is due in no small part to support from the PSO Levy. In fact, if wind conditions were perfect (and any sailor will tell you that they rarely are!), we could actually generate 70% of our electricity using wind right now.

With the increase, the PSO Levy and the VAT that is added on will make up around 7% of the average household’s electricity bill. Strangely enough though, the falling wholesale prices that have driven up the PSO Levy, have actually driven household electricity bills down by 7% over the last year, and that effectively neutralises the entire PSO Levy, increase and all. 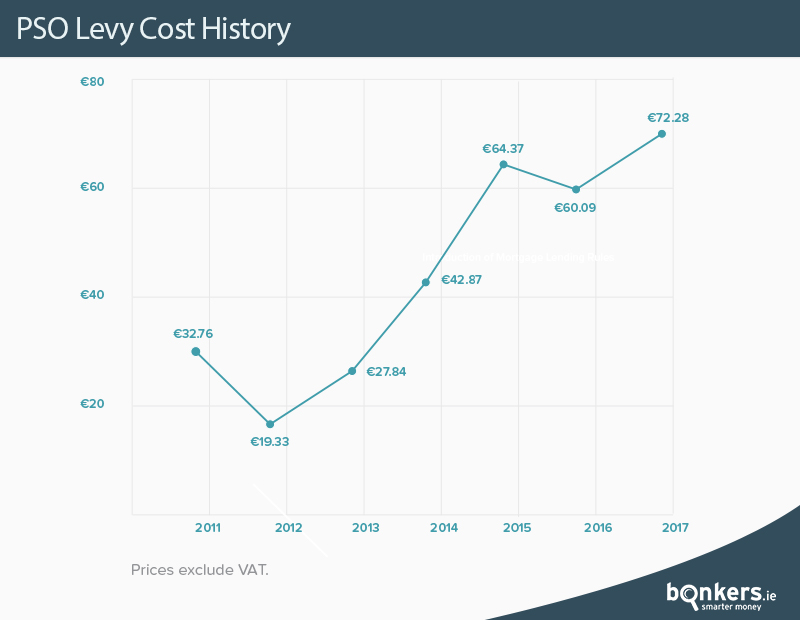