Are gas prices really the highest they've ever been?

21st May, 2013...
This article is quite old, you might prefer our latest Gas & Electricity pieces
Simon Moynihan
Staff Writer

Bord Gais reported that their energy price index had hit a record high last month. And after a series of punishing gas price increases, it was also reported that Irish households are paying more to heat their homes than they have ever done before. Certainly there's no doubt that gas and electricity prices are extremely high, but are they really the the highest they have ever been?

Turns out that household gas prices are not the highest they've ever been, and at bonkers.ie we were as surprised as anyone to find this out. Especially since gas prices have gone up by an enormous amount over the last few years.

We found out because we’ve managed to get our hands on some pretty interesting gas pricing information that Bord Gais probably thought was consigned to a dusty archive. In fact, we’ve managed to acquire gas prices going all the way back to 2003. And with these prices, we’ve been able to track how much Irish households have been paying to heat their homes during the last decade.

Over the last ten years, gas prices were actually at their highest in 2006 not 2013. Back then, Irish households were paying around €970 per year for natural gas - just a little more than the €961 you'd pay to Bord Gais today.

The huge 2006 gas bills happened because Bord Gais cranked through three substantial price increases between 2004 and 2006, at a time when people really weren't paying much attention to the price of anything. Customers who were used to paying around €520 suddenly found themselves paying €970 per year. An extraordinary 86% price jump that added a whopping €450 to the average bill.

But really, people didn’t suddenly find themselves spending a ton more money to heat their homes. Back then they probably didn’t even notice. In 2006, everyone was so busy riding the Celtic Tiger and spending like Elton John that something as trivial as gas price increases would hardly have even registered. If anyone did notice at all, they probably would have just shrugged and said sure what can you do…

And of course there wasn’t much that people could do. Bord Gais was the only show in town. If you wanted gas, you got it from them and that was it. And if they put up prices, there wasn’t much you could do about that either.

For something that makes up such a significant part of our household budgets and is a necessity in a climate like ours, it’s quite shocking to see how erratic gas pricing can be. Although most experts now agree that the days of cheap natural gas are now well and truly behind us. 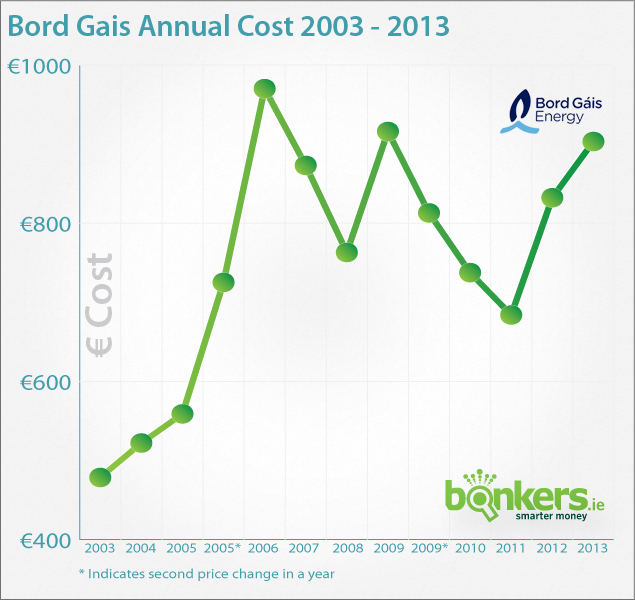 This chart tracks what we’ve been paying for piped natural gas between 2003 and 2013. We’ve based it on average household gas consumption of 13,800 kWh and included VAT and standing charges, but for comparison purposes, we haven’t included Carbon Tax as that’s relatively recent and wasn’t around in the noughties.

In 2006, customers were paying an annual standing charge of €343. That’s the highest standing charge we’ve ever seen and would be completely unacceptable to the modern customer who now pays around €90 per year.

The lowest standing charge over the last decade was €56.75 in 2008. It makes you wonder how you can reduce standing charges by €286 per year and keep the revenue rolling in. Well, you have to compensate somehow, and Bord Gais did just that. Unit rates went up 37% in the same period which equated to an extra €230 – which made up most of that shortfall.

And then we’ve got unit rates. We’re currently paying 5.89 cent per unit, but the highest unit rate over the last 10 years was in 2009 when customers were paying 6.21 cent.

And the cheapest year? That was ten years ago in 2003. Back then, customers were paying a measly €478 for a year's supply of gas. If prices had stayed in line with inflation they’d have gone up by just 22% over the last decade and customers would now be paying around €581 per year. But gas prices pay no attention to inflation, and are now at €961 per year. That’s an inflation busting increase of 101%.

For the purposes of this post, we have used the regulated Bord Gais Standard rate throughout. We have also included VAT throughout. We have not included any discount tariffs. We were unable to obtain some pricing data from the last ten years, so we have had to use best estimate in some of our calculations.